Consternation in Spain as US nuclear submarine docks in Gibraltar 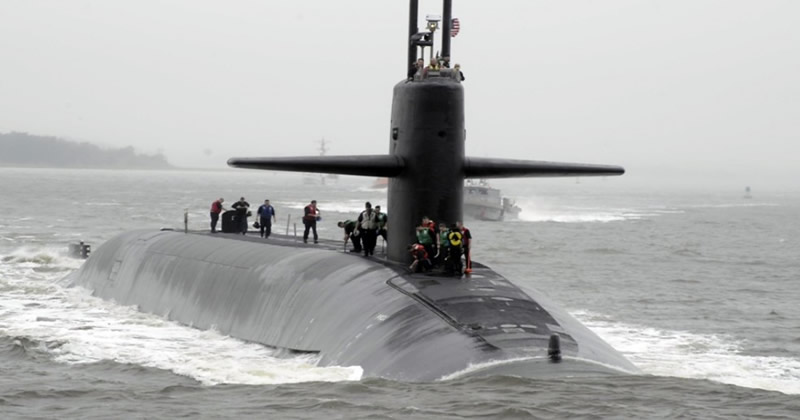 Consternation in Spain as US nuclear submarine docks in Gibraltar. image: us navy

The USS Alaska, an American Navy submarine armed with Trident II D5 ICBMs, has docked in Gibraltar, for repair and maintenance work to the vessel, and as the US Navy explains, Ohio-class SSBNs, like the USS Alaska, “are specifically designed for prolonged deterrence patrols”, adding that on average, submarines spend 77 days at sea followed by 35 days in port for maintenance.

This action has again caused consternation in Spain, among residents of Campo de Gibraltar, one of the regions of the province of Cadiz where up to four of its eight municipalities – Algeciras, Los Barrios, La Línea de la Concepción, and San Roque – are located in the semicircle that makes up the Bay of Algeciras, which is also home to Gibraltar.

Around 270,000 residents surrounding Gibraltar live with the fear that one day an accident might occur with one of the nuclear vessels that enter the British territory, which would cause serious damage to the region.

Antonio Muñoz, president of the environmental association, ‘Verdemar Ecologistas en Acción’, recalls, “Since the Tireless incident in 2000, we have registered the entry into the port of Gibraltar of more than 100 nuclear submarines. Most have been docked for a while and belong to the United Kingdom“.

Verdemar Ecologistas en Acción has denounced the danger involved in the transit of these ships that transport nuclear warheads through the Strait of Gibraltar and has requested that the area “be free of artifacts, nuclear-powered submarines and other ships that are authentic floating bombs”.

Mr Muñoz draws attention to why the USS Alaska has pulled into Gibraltar, when it could have docked perfectly at the Spanish-American base of Rota, further along the coastline, pointing out, “This makes us suspect that the Gibraltar military port is becoming a nuclear submarine repair port, when it does not currently have the necessary infrastructure as it is designed for provisioning and rest for the crew”.

Adding, “this type of work on nuclear submarines in ports that are not designed for these purposes is putting the population of Campo de Gibraltar in danger. There is no nuclear Emergency Plan, but we don’t want it either. What we want is for them to leave”.

One of the most important crises between Spain and the United Kingdom was experienced in May 2000, when the ‘Tireless’, a British nuclear Trafalgar class submarine, docked in the port of Gibraltar for what was expected to be a minor repair to an alleged crack found in a cooling pipe near its nuclear reactor, sparking fears that it could leak and contaminate the environment, and the vessel remained in the British Overseas Territory for almost a year, prompting protests from the population of Campo de Gibraltar and strong diplomatic tension between the two governments.

“It would be an environmental disaster. We calculate that a radioactive leak like the one from ‘Tireless’ – the escape was active on the submarine’s journey from Crete to Gibraltar – with the marine currents, would affect half of Andalusia and part of Africa”, stresses the president, as reported by 20minutos.es.

Making a stop at the Rock! 🇬🇮 #USSAlaska (SSBN 732) arrives at the Port of Gibraltar. #AdvantageAtSea #submarines