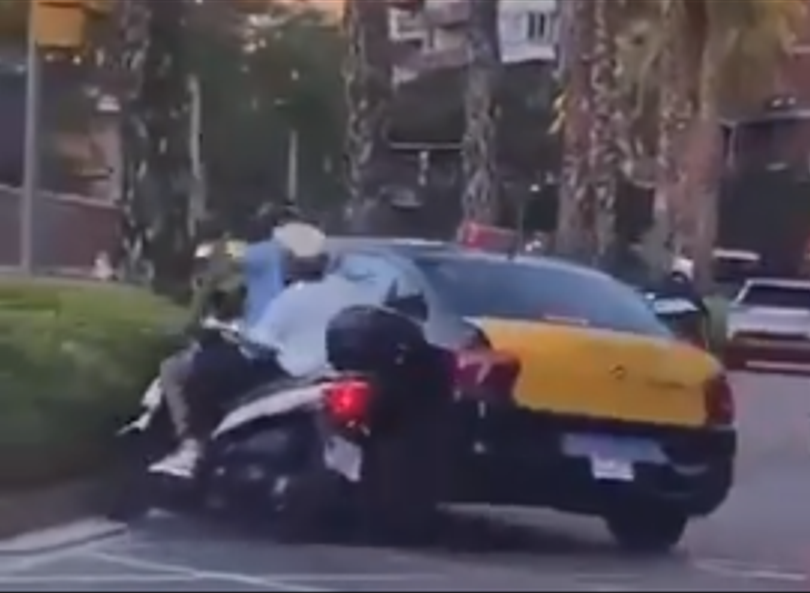 Barcelona taxi driver has his licence revoked after knocking two people off a motorcycle. Image: Twitter

BARCELONA taxi driver who knocked two people off a motorcycle without stopping, has had his licence revoked

A taxi driver in Barcelona who collided with a motorcycle carrying two people, as they were both travelling along Calle Travessera de Dalt, at the top of Calle La Granja yesterday, Thursday 1, has today had his taxi driver’s licence revoked by the Institut Metropolità.

It was the taxi driver’s employers, the Elite Taxi association who had reported this incident to the Institut Metropolità del Taxi (Imet), so that the driver “does not drive a taxi again”.

After the incident, Elite Taxi wrote on its Twitter profile, “Thanks to all the colleagues who have focused on locating him and informing the Guàrdia Urbana“.

A statement issued today, Friday 2, by the Elite Taxi association has “strongly condemned” the driver’s actions as inappropriate for a professional at the wheel, saying, “There is no excuse or mitigation for something like this, because there are laws that must be respected in any circumstance, and because the physical integrity of people is above any other consideration”,

As seen in footage that was uploaded on social media after the accident – which went viral – the driver suddenly changes lanes and cuts across the motorcyclist, causing him and his passenger to crash off the bike, while the driver continued on his way through the Ronda General Miter without stopping to see what harm he had caused to the two people.

TV3 has reported that the municipal body will also appear in the case against the offender, after the Guàrdia Urbana identified the driver, and their investigating officers are coordinating with the Road Safety Prosecutor’s Office to qualify the crimes that may arise from the incident, as reported by cronicaglobal.elespanol.com.