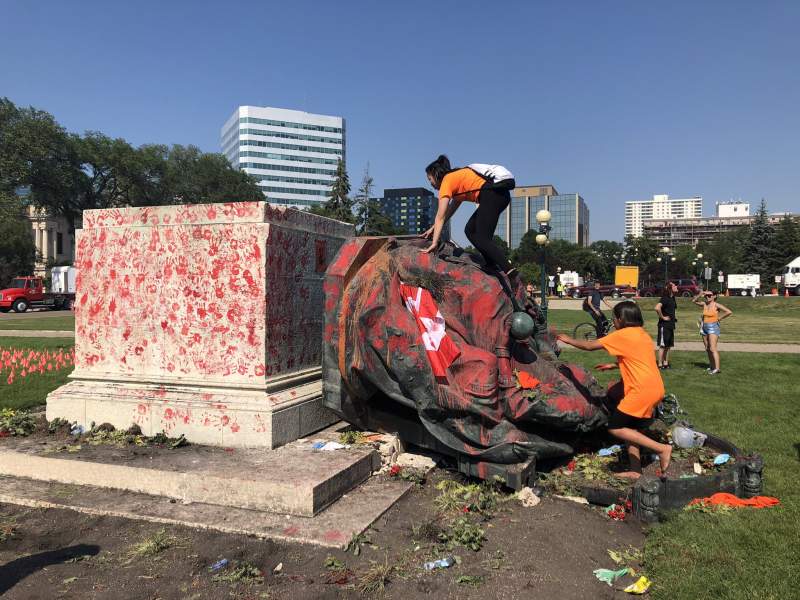 QUEEN VICTORIA and Queen Elizabeth II statues have been toppled in Canada during protests on Canada Day.

The statues were pulled down during protests against the country’s treatment of indigenous people.

Demonstrations on Canada Day yesterday, July 1, saw protests of the country’s residential schools, where native children had to attend Christian schools run by the state and were prevented from speaking their own languages to try and integrate them into Canadian society.

Over 150,000 children were forced into institutions, which were opened when Queen Victoria reigned. Many children were beaten, verbally abused, raped and suffered from malnutrition. It is thought that nearly 60,000 died before the schools were closed in the 70s.

On Wednesday, June 30, a Canadian indigenous group announced that they had found 182 human remains in unmarked graves at a school that was formerly run by Catholicsnear Cranbrook, British Columbia. The school shut in the 1970s, Sky News reports.

Canada Day is usually in celebration of the country’s independence, however, this year was more in respect for the recent discovery of nearly 1,000 unmarked graves at residential schools in Saskatchewan and British Columbia.

The demonstrations yesterday saw people chanting “no pride in genocide” around the statue of Queen Victoria in Winnipeg, Manitoba. The figure was then covered in paint and toppled over by the crowds.

The protesters covered the plinth in red handprints and placed a placard reading “We were children once, bring them home”.

This #CanadaDay I want to remind you: pic.twitter.com/orhrw7Zo0q

Not long after, a monument to the current monarch was toppled by the protesters, videos and images circulating on social media show.

Chief Jason Louie of the Lower Kootenay Band told CBC Radio: “Let’s call this for what it is.

“The Nazis were held accountable for their war crimes.

“I see no difference in locating the priests and nuns and the brothers who are responsible for this mass murder to be held accountable for their part in this attempt of genocide of an indigenous people.”