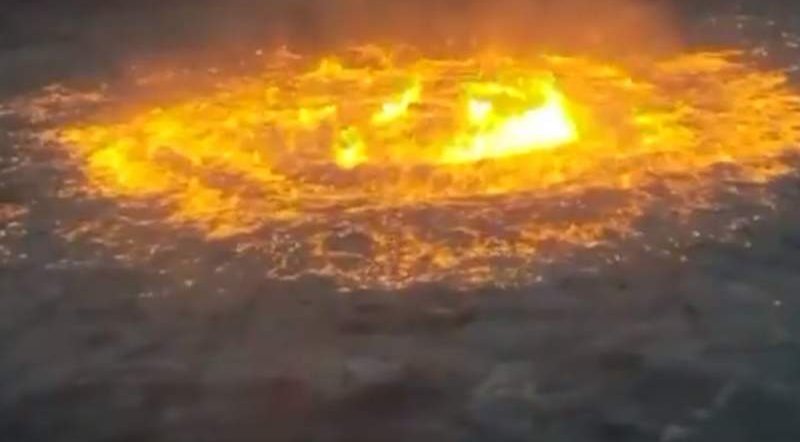 A gas pipeline leak in the Gulf of Mexico has set the ocean ‘on fire’ as balls of flames erupt as rescue vessels rush to the scene.

THE Gulf of Mexico was engulfed in flames after a huge fire was triggered by a leak from an underwater pipeline that sent flames rushing to the surface creating spectacular images caught by a rescue helicopter that risked certain danger to capture the video.

Bright orange flames, described on social media as an “eye of fire” due to their circular shape, were seen burning on the surface close to a state-owned oil drilling platform located west of Mexico’s Yucatan peninsula.

Upon picking the alert up from their maritime radio alarm systems, a number of boats rushed to the scene in a desperate attempt to smother the flames.

State oil company Pemex confirmed the fire was fully extinguished after more than five hours. It is understood that the huge blaze began in an underwater pipeline connecting to a platform at the firm’s flagship Ku Maloob Zaap oil development.

Having to put out a fire in the middle of the Gulf of Mexico feels just too difficult to believe and yet pic.twitter.com/8OFNNiKyrj

Pemex said no injuries were reported, and production from the project was not affected after the gas leak ignited around 5:15 a.m. local time. It was completely extinguished by 10:30 a.m. The company added it would investigate the cause of the fire.

Pemex, which has a long record of major industrial accidents at its facilities, added it also shut the valves of the 12-inch-diameter pipeline.

Angel Carrizales, head of Mexico’s oil safety regulator ASEA, wrote on Twitter that the incident “did not generate any spill.” He did not explain what was burning on the water’s surface. Ku Maloob Zaap is Pemex’s biggest crude oil producer, accounting for more than 40% of its nearly 1.7 million barrels of daily output.

“The turbomachinery of Ku Maloob Zaap’s active production facilities were affected by an electrical storm and heavy rains,” according to a Pemex incident report shared by one of Reuters’ sources.