Passenger shot in the head on a bus in Valencia 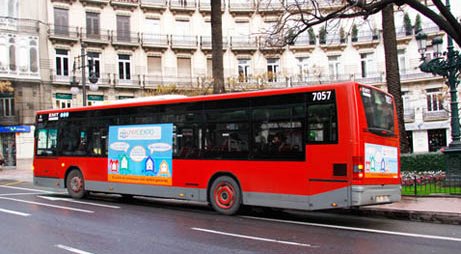 Passenger shot in the head on a bus in Valencia. image: wikipedia

A 69-year-old man was injured this Thursday 1 when he was shot in the head by a pellet fired through the window while travelling through Valencia on a bus belonging to the Municipal Transport Company (EMT).

According to National Police sources, and the Emergency Information and Coordination Center (CICU), the incident took place at around 11:30am in the morning, when the victim was travelling as a passenger in an EMT bus that was approaching the confluences of Monestir de Poblet and Pío XII, where they meet the IES Conselleria.

Las Provincias newspaper says that they contacted the EMT to enquire into the circumstances surrounding the incident, to which a company spokesman allegedly responded, “something like this has happened”, but without clarifying the actual facts.

According to police sources, the ensuing investigation was carried out by the Generalitat Police, reporting that the driver of the vehicle said he heard a loud sound of something impacting, accompanied by a scream from a passenger, at which point he immediately stopped the bus to find out what had happened, to discover the passenger had been shot through the window.

A small hole was discovered in the top part of the last window on the left-hand side of the bus, that showed clear evidence of the passage of a projectile into the vehicle, and the subsequent injury to the victim.

CICU sources confirmed that an Advanced Nursing Life Support ambulance was deployed to the scene, where the victim, a 69-year-old man, was found to have an open wound on his forehead, for which he received first aid on the spot, and was later evacuated to Hospital La Fe.

The National Police has opened an investigation to search for the perpetrator of the shot, who at this moment, has not been located.

In April, two other buses on line 99 of the EMT network in Valencia were hit with a pellet gun, where the rear windows of the coaches were broken and cracked due to the impact, while in mid-May, the National Police arrested five young people for firing pellets at passers-by from a rooftop in the Valencian Exposition district.