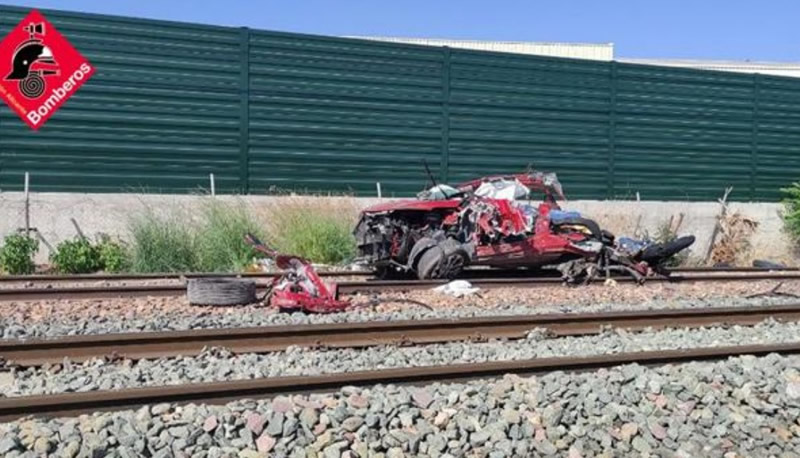 Four people died this afternoon, Friday 2, after a collision between a car and a train, on the Camí de Castilla level crossing in the municipality of Novelda, in Alicante province, at around 5:15pm.

A Samu unit and a Basic Life Service unit have been displaced to the scene of the incident, although nothing could be done to save the lives of any of the vehicle’s passengers – which included three women and one man – only confirming the deaths of all four at the scene.

One passenger on the train had to be treated by the medical team for an anxiety attack, but she was discharged and rejoined the rest of the passengers.

According to Adif, the railway infrastructure manager, the level crossing is equipped with lights and acoustic signals, plus automatic semi-barriers, and they have confirmed that all trains on the La Encina-Alicante line have now been suspended.

This stoppage affects the Euromed 1192 Alicante-Barcelona, and the 18523 Valencia-Cartagena Media Distance trains, as an investigation takes place into the tragic incident, with Renfe arranging alternative transport for the stranded train passengers.

Adif has announced that it has opened an investigation to determine the causes of the accident, and is “at the disposal of the authorities”, whilst conveying condolences to the families and friends of the victims and thanking the emergency teams for their work.

José Luis Ábalos, the Minister of Transport, Mobility, and Urban Agenda, on Twitter, posted that he deeply regretted the “tragic” accident and expressed “all his support and solidarity” to the families of the deceased and his “gratitude to the emergency services for the work done”

Also, President of the Generalitat, Ximo Puig, conveyed his condolences to the families of the deceased and took advantage of the message to ask people to exercise “great caution” when traveling, as reported by lasprovincias.es.