Estepona school to be built with Urban Development Fund investment of €8.2m 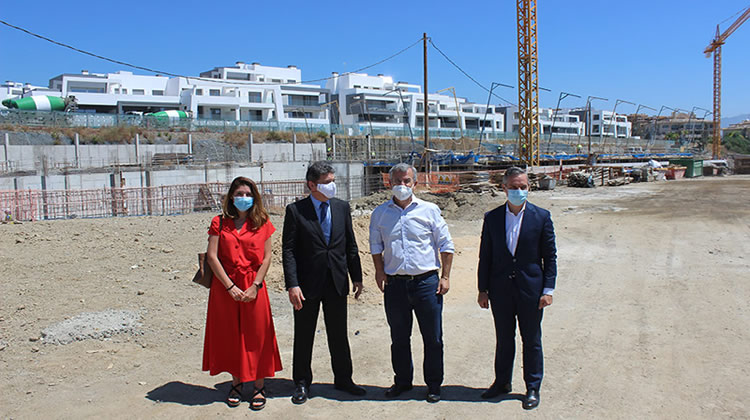 Estepona to have a new trilingual school constructed, funded by €8.2m investment from the Urban Development Fund

A new trilingual school will be built in Estepona, with an €8.2 million reimbursable loan investment from the Urban Development Fund, a financial instrument endowed with ERDF and Andalusian Government funds to promote investments that help revitalise towns and cities.
This project will involve a global investment of close to €16 million euros in the Malaga municipality and once operational, will generate a hundred direct jobs and another 25 indirect ones.

Juan Bravo, the Minister of Finance and European Financing, has attended the signing of the operation, which was processed by Arcano Capital, one of the intermediaries in charge of managing this Urban Development Fund, which aims to invest €200 million in viable investment initiatives that have an impact on the urban development of Andalucia.

Mr Bravo visited the site of the new school on Friday 2, accompanied by José María García Urbano, the mayor of Estepona; Luis Placencia, the head of Business of the Aquinas Group; Cristina Reina, the financial director of Arcano; and Leonor Martínez-Pereda, head of the FDU.

Grupo Aquinas are the promotors of this project, which will increase Estepona’s positioning as a destination for foreign residents, due to the international component of the school, which will have a capacity for 800 students built on a 10,850m² plot of land, with the proposed opening date of September 2022.

The concession of the plot, owned by Estepona City Council, was awarded to this group for 75 years, together with another plot that will house a student residence, which is scheduled to be developed in a second phase.

This is the fifth operation that Arcano has signed so far this year through the Urban Development Fund, whose resources come mainly from the European Regional Development Fund (ERDF) operational program of Andalucia 2014-2020 and the Junta de Andalucia.
The principal purpose of this fund is to promote digitisation, energy efficiency, emission reduction projects, environmental improvement, preservation of cultural and tourist heritage, revitalisation of towns and cities, and social inclusion, as reported by juntadeandalucia.es.