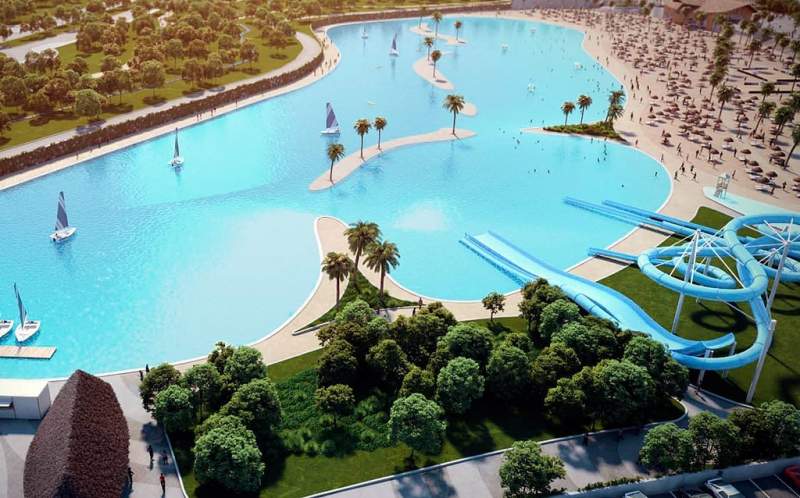 Alovera beach in Guadalajara is around 40 minutes drive by car from Madrid.

The Junta de Castilla-La Mancha issued the resolution to build Europe’s largest artificial beach, Alovera Beach, months before the pandemic started. It will be the largest artificial urban beach in Europe and the first dedicated to public use.

The project is not expected to have any significant effects on the environment, as can be seen from the environmental measures included in the plans presented by the Rayet construction group, so will not need any special planning permissions which is hoped will speed up the construction.

The beach features a large area of water, almost 25,000 square meters, where different types of water sports could be practised and has its own sailing school. The total build will occupy a total space of ​​104,180 m2.

To carry out the construction of the huge pool, the group had partnered with the Chilean company Cristal Lagoons, a specialist in this type of facility. In addition, the complex has a large urban beach of 15,000 m2, with beach volleyball courts, beach bars, a  restaurant with a capacity for 1,000 people and even it’s own fully-featured water park.

Europe’s largest artificial beach has a planned investment of €16.5 million euros, the Alovera City Council actually gave authorisation for the project back in October 2017.

According to the construction companies, the project will be ready in “two or a maximum of three years.” Dates that, however, have already been extended.

Construction will be carried out on two levels. The first is to the access level. The parking area, access plaza, central plaza and some of the main buildings such as access control, administrative, shop, offices, changing rooms, left-luggage office, lockers, gym and infirmary will be installed in it.

On the lower level the events area, warehouse, toilets, garden area and the large sheet of water will be developed. The sandy area of ​​the beach, with a slight slope of 2%, will serve as a link between the two levels. Where, in addition, there will be buildings for a snack-bar, buffet-restaurant, toilets, navigation school and warehouse.