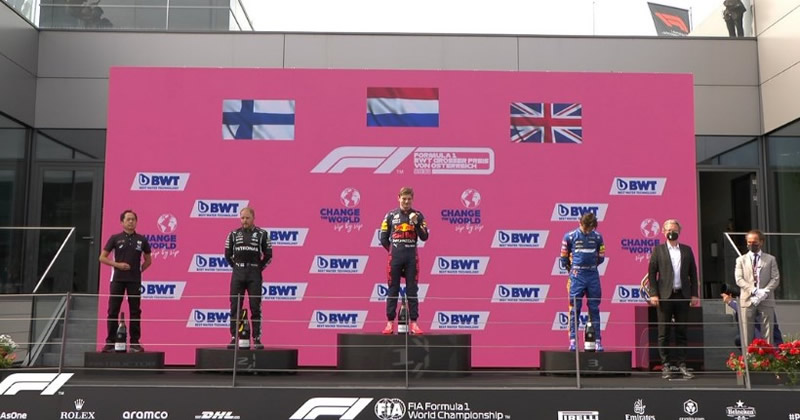 Max Verstappen won today’s (Sunday 4) Austrian GP at the Red Bull Ring in Spielberg – his third win in three races – to increase his lead at the top of the driver’s championship to 32 points, as his nearest rival, world champion  Lewis Hamilton , finished back in fourth, and not on the podium.

Young British driver, Lando Norris , in the McLaren, put in another fantastic performance, having started from second on the grid, to finish in third, behind Mercedes driver, Valtteri Bottas, even after Norris had been handed a five-second time penalty for an incident involving Red Bull’s Sergio Perez – who eventually finished sixth.

This was Lando’s third podium finish this season, with his third-place finish only down to the penalty incurred, and his McLaren really looks to be ready to challenge Red Bull and Mercedes for the rest of this season.

Max Verstappen was out on his own for the best part of the race – on what is his team’s home circuit, where he has now won a race two weeks in a row – and his Red Bull’s superiority, combined with the Dutchman’s excellent driving, must surely see him crowned F1 champion at the end of the season.

Lewis Hamilton had been running in second position at one point, but he was told by team orders to let his teammate Botas go by, before Norris also overtook him, which sent Hamilton into the pits for new tyres, but it was too late by that point for him to make up any significant ground on the others.

Speaking after the race, Verstappen said happily, “Even better than last week. The car was on rails on every tyre. Incredible, guys. That was just amazing, let’s keep this up”, as the teams head next to Silverstone for the British GP on July 18.