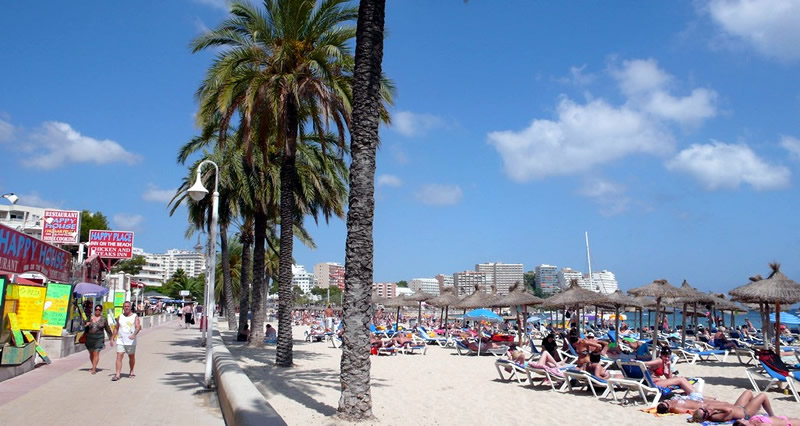 Armed police patrols will be on duty in the hotspot areas of Magaluf – on the popular British holiday island of Mallorca, in the Balearics – this Summer, as the authorities look to clamp down on the antics of drunken holidaymakers in past years.
Since the British government put the Balearic Islands on the green list for travel, bookings to the islands, especially Mallorca, have reportedly gone through the roof, so the authorities are taking no chances and have drafted in armed police from Madrid, according to The Mirror.
Magaluf in particular has always had the reputation for wild nightlife, and only last year, the famous Punta Ballena strip was closed down by the local authorities, with officials saying they wanted to clean up the tarnished reputation of the resort.
Extra police patrols were already in position on Saturday night (July 3), as the first planeloads of British holidaymakers touched down on the island, along with tourists from other countries like Italy, France, and of course the Spanish mainland, with local newspaper Ultimahora.es saying that the island’s tourism was no longer limited to just the Brits, estimating the average age of tourists at around just 20 years old.
Many of the resort’s popular nightlife venues are not open yet, all bars and restaurants have coronavirus restrictions in place, and a closing time of 2am, as opposed to the previous late hours that saw bars staying open until 5am, and new laws in Spain prevent anybody taking drinks out on the streets, with beaches having to be empty of people by midnight.
Magaluf police have reportedly estimated they will have to deal with around 2,500 tourists at the height of Summer, compared to 12,000 a few years ago in the resort’s heyday, with a spokesman allegedly telling the Spanish publication that it was “a relatively quiet night”.