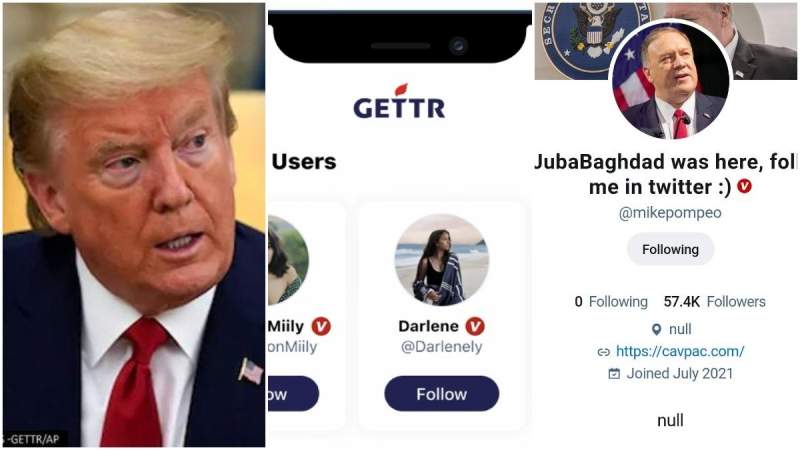 A new site released by Jason Miller, a former senior adviser to Mr Trump, was breached by an “intruder” on Sunday, July 4.

“The problem was detected and sealed in a matter of minutes, and all the intruder was able to accomplish was to change a few user names,” Mr Miller told Reuters in a statement.

Mr Miller also told the agency that more than 500,000 people have registered to use the site and added that the situation surrounding the site’s security had been quickly “rectified”.

The new site is billed on app stores as a “non-bias social network for people all over the world” in the latest attempt by high-profile conservatives to rival Big Tech.

According to Reuters, a reporter for Salon shared screenshots of several Gettr profiles that were altered to read “JubaBaghdad was here, follow me in Twitter :)”.

An insider said that accounts that had been hacked included those of former Secretary of State Mike Pompeo and Mr Miller’s own account. The official launch of the new app took place on Sunday, however, the social media site had been available to download in its Beta form prior to this date.

The platform boasts a Twitter-like dashboard with trending topics and many other similar features, allowing users to post 777 character updates.

The platform had previously existed as a site used by opponents of the Chinese Communist Party and has ties to exiled Chinese billionaire Guo Wengui, who reportedly has a financial relationship with Steve Bannon, Mr Trump’s onetime adviser

The app’s release comes amid growing disillusion among conservatives with mainstream social media platforms such as Facebook and Twitter, claiming without evidence that they are attempting to silence or “cancel” their viewpoints.

Such scrutiny by the conservatives only intensified following Mr Trump’s banning from such sites following the 6 January insurrection with Twitter saying the former president had used his platform to “incite violence”.