Work has begun on Autocine Málaga 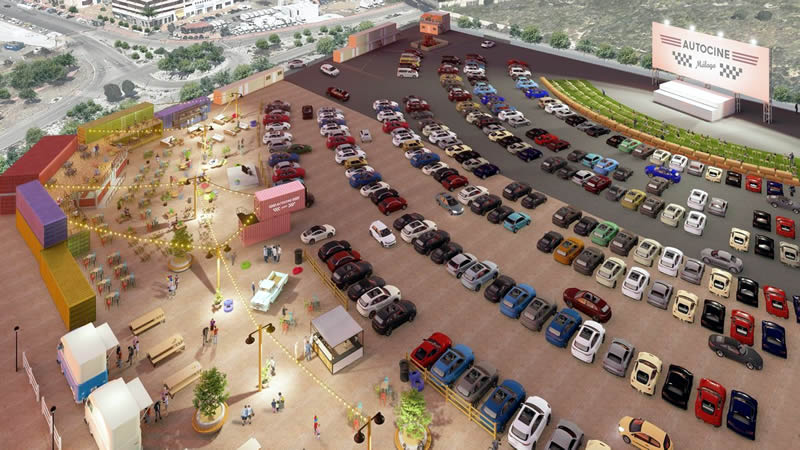 Work started today, Monday 5, on the construction of Autocine Málaga, which once completed, will be the second-largest permanent cinema in Europe, designed along the lines of the great American drive-in cinemas we have all seen in films.
Autocine Madrid RACE will establish this project in Malaga, located in the Guadalhorce industrial estate, just six kilometres from the city centre, with a capacity for 2,500 people, and a huge parking space for 250 vehicles and 200 hammocks, located in front of the cars.
Now that the work has begun, it is estimated to last two months, with the projected aim of opening the doors at the end of the Summer, “with an event, at the height of this great project that comes to Malaga, and that will have great stars among the guests”.
Tamara Istambul and Cristina Porta are the promoters of this project and they already have the experience and success of the Autocine Madrid Race for five years, as they point out, “We are very excited to open in Malaga to promote a space full of magic and the attractiveness of the typical enclosures from the ’80s in the US”.
Adding, “We have seen them hundreds of times in Hollywood movies but most of us have never been to a drive-in. That will change from next September, when we open the first largest permanent drive-in in Andalucia, open all days with events and film screenings”.
Autocine Málaga will cover 16,000m² and the films will be screened on a 250m² screen, the largest outdoor screen in Andalucia, which will screen both newly released and classic films, and will be visible from all points of the venue.
It also includes a gastronomic area, a space for ‘food trucks and an ‘American Diner’, with a wide variety of menus such as hamburgers, dogs, and healthy food. Users who attend in their vehicles will be able to hear the sound of the films through a specific FM frequency, and will be able to order their food and drinks through a mobile application without having to get out of the car. Also, Autocine Málaga will have a wide program of special events throughout the year.
The arrival of Autocine Madrid Race thus begins the expansion of its business model in Malaga where it will generate more than one hundred jobs, aiming to become a reference point on the national scene both for the screening of film premieres, and for holding top events, as reported by 101tv.es.