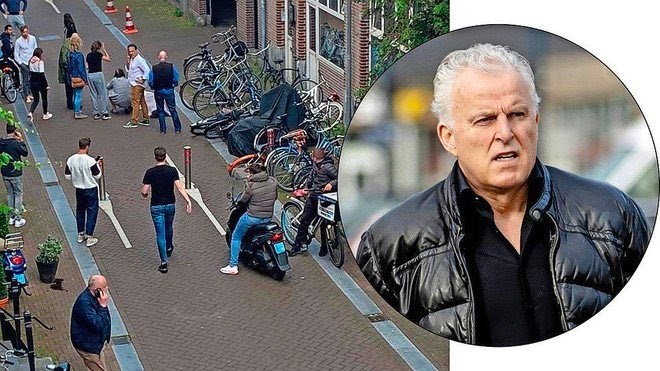 A team of specialist Dutch police clothed with bulletproof armament were seen carrying out a search in a Mcdonald’s restaurant in Amsterdam for suspects just an hour after the famous Dutch underworld reporter Peter R. de Vries lay bleeding in the street after being shot in the head by an assailant or assailants.

Security footage from a local restaurant (below) shows Peter R. de Vries walking up the street, as he gets towards the end you can hear a shot ring out.

De Vries is reported to be fighting for his life in a critical care unit, due to the nature of the case his exact location for the present time is being kept secret. De Vries did not want security, even after the murders of Nabil B. and lawyer Derk Wiersum

Police soon cordoned off the area (see video below) as crowds gathered near the site where the incident took place in what is seen as an unusually brazen attack on a journalist in the Netherlands.

Finance Minister Wopke Hoekstra said in Parliament he was ‘deeply shocked’ by the attack.

The Dutch journalist & crime fighter was shot in broad daylight. Peter R. de Vries started as a crime journalist and was instrumental in catching all Heineken kidnappers, and lots of other high profile cases.

A video released within minutes of the shooting showing Dutch police swoop on alleged suspects has yet to be verified by authorities.