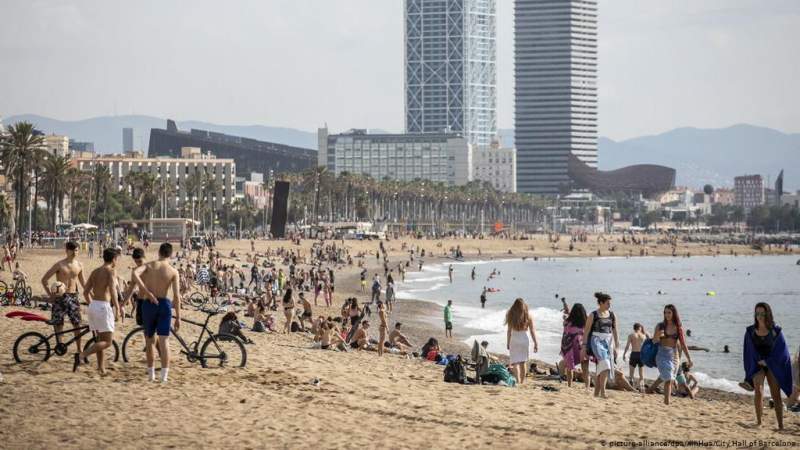 Europe places seven autonomous regions at high risk as Navarra and the Balearic Islands restrict nightlife due to youth-related outbreaks.

Until mid-June of this year, all the indicators had been falling which led Spain’s incidence rate to fall below 100 cases per 100,000 inhabitants for the first time in ten months. A situation that had allowed a slight de-escalation of nightlife restrictions that heralded a return to normality in what was seen as the most stable period to date.

Germany’s disease control agency on Friday added Catalonia, Navarre and Aragon to a list of places considered “high risk” for the novel coronavirus.

The change means people returning from the three regions in northeastern Spain, including popular holiday spots Barcelona and the Costa Brava, face the prospect of a 14-day quarantine. Coronavirus tests will be mandatory for all arrivals from high-risk areas from next week.

However, after two weeks of openness, it seems that Spain is not yet sufficiently protected against the virus to regain the level of social interaction that the start of summer demands.

The outbreaks (the Mallorca macro-outbreak), linked to student parties and post-exam celebrations are leading communities to step on the brakes and re-tighten restrictions.

The region of Navarra in Spain has announced that it will bring the closing of bars and nightclubs down to 1 am; The Balearic Islands will limit the capacity of leisure and restaurant venues to 100 people indoors and 200 outdoors; Galicia will announce the new measures today, and others such as the Basque Country, Murcia and Andalucia have not ruled out re-introducing restrictions, with other regions like Extremadura and Castilla la Mancha likely to follow suit.

Everything indicates that Spain is at the beginning of a fifth wave.

According to the latest map of the European Center for Disease Prevention and Control (ECDC), seven communities are in red, that is, on alert for high risk: Catalonia, Andalucia, Valencian Community, Aragón, Cantabria, La Rioja and the Canary Islands .

Increased social interaction and the Delta variant are being blamed. The zones are classified in red if the cumulative rate of coronavirus cases in 14 days is between 75 and 200 and the positivity rate in the detection tests for the disease is equal to or greater than 4%. The rest of the communities, as well as in Portugal, are in orange, which means that their notification rate in the last 14 days was less than 50 and that of positivity equal to or greater than 1%.

Cantabria registered 204 new cases on Sunday, July 4, 75 more than the previous day, and 32 hospitalised, eight more, of which four are in the ICU, one more than on Saturday, July 3.

Likewise, the accumulated incidence has continued to rise significantly, reaching 304 cases at 14 days –23 points more than the previous day– and 206 cases at 7 days, 17 more than on Saturday, remaining at “very high” levels. according to data from the Ministry of Health. The only positive note being that is there have been no new deaths reported.

Catalonia is experiencing its fifth wave in a more virulent way than the rest of Spain. The region has seen infections increase sevenfold in two weeks and, although it mostly affects unvaccinated twenty-somethings who generally do not have severe symptoms, it is now beginning to translate into more hospital admissions.

Andalucia registered 2,144 cases between Sunday and Monday, the highest number since Saturday, April 17 (when 2,182 positives were recorded). On the other hand, the cumulative incidence rate has increased for the fifth consecutive day and now stands at 192.3. In fact, the Health Minister, Jesús Aguirre, announced that they will once again recommend the use of the mask outdoors.

The Canary Islands have registered 345 new cases of coronavirus in the last 24 hours and the Accumulated Incidence (AI) at 7 days continues to rise, in this case to 97.7 cases. In Aragon, the infections have soared 140% in just one week (has gone from 544 to 1308), figures not seen since the early days of May

In La Rioja the incidence has risen eight points this weekend and, in the Valencian Community, the summer season begins with an incidence 47 times higher than in 2020. Let’s just hope that Spain’s vaccination campaign can keep up the pressure, if not, we could possibly return to the dark days of lockdown very soon. RH.