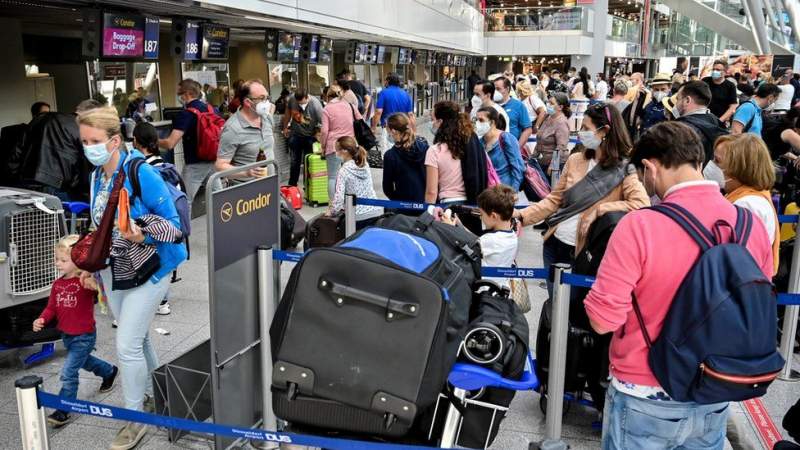 Germany to lift Covid-related travel ban on the UK  and four other variant-hit countries.

A Covid-related travel ban on people from the UK and four other variant-hit countries is being lifted by Germany on Wednesday, July 7.

The restrictions, which also applied to people from Portugal, Russia, India and Nepal, will be relaxed from tomorrow, with fully vaccinated travellers not required to quarantine. The countries will now be reclassified as “high incidence areas”, the Robert Koch Institute (RKI) said on Monday.

However, non-vaccinated people will still be required to quarantine for up to ten days, with the option to end their isolation early with a negative test on the fifth day. The five countries have until now been classified as “virus variant areas” because of the spread of the Delta and Delta Plus variants, which were first identified in India.

Although German citizens and residents were exempt from the ban, they were required to quarantine for 14 days when they arrived in the country. German chancellor Angela Merkel said she wanted to change the designation during a visit to the UK last week, with the country having been on the higher tier since May 23.

However, Germany remains on the UK’s amber list as part of the traffic light system for international travel. Despite the rising share of the Delta variant, the overall incidence in Germany has been steadily declining in recent weeks.

The relaxation of restrictions by Germany came just hours after prime minister Boris Johnson confirmed that most Covid-related rules are expected to be lifted from July 19. The government is also expected to announce plans for fully-vaccinated Britons to travel to amber countries without having to quarantine on their return.

German health minister Jens Spahn had said last week that the federal government will look into the situation (of allowing travellers form delta variant-hit countries) “in the next few days”.

The relaxation in curbs is driven by the fact that vaccines have been found effective against the delta variant, which was first discovered in India.

“We think that in the foreseeable future, those who have received double jabs will… be able to travel again, without having to go into quarantine,” German Chancellor Angela Merkel had said on Friday.

Last month, Dubai eased restrictions on Indian travellers who have received two doses of a UAE-approved Covid-19 vaccine. The country has approved the vaccines made by Sinopharm, Pfizer-BioNTech, Sputnik V and Oxford-AstraZeneca.