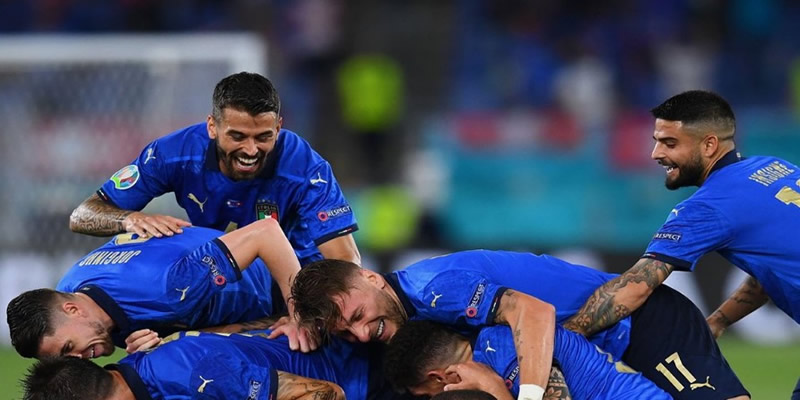 Italy versus Spain was the first of the two big Euro 2020 semi-final matches, being played this evening, Tuesday 6, at Wembley Stadium in London, with a place at stake in Sunday’s final, where the winners will meet the victors from the England versus Denmark game that is being played tomorrow, Wednesday 7, also at Wembley.

Italy went into the match without their injured wing-back Leonardo Spinazzola, and Spain coach Luis Enrique decided to play Mikel Oyarzabal up front, in favour of Alvaro Morata, or Gerard Moreno.

An entertaining and open game of back and forth football by both teams simply couldn’t find that final shot on target, with Busquets totally dominating the middle of the park, it’s surprising that Mancini didn’t have a plan to counteract Spain’s creative genius, but energy, intensity, and skill are on show from both sides in this match by the bucketload.

Italy took almost 45 minutes to have a shot on goal, but when it came, Emerson grazed Simon’s crossbar with such a superb attempt, but the two teams went in all-level at halftime.

Busquets had a glorious opportunity to open the scoring after 52 minutes but he managed to curl his shot over the bar instead, something which didn’t happen eight minutes later, as Donnarumma threw his clearance to the feet of Marco Verratti, who in turn picked out Insigne who took the ball down the left before laying it off to Immobile, with Laporte trying to intercept, but only succeeding in giving the ball to Chiesa who curled a magnificent shot past a stricken Simon for 1-0 to Italy.

Now Spain had to go for broke, with Luis Enrique finally bringing Morata on to replace Torres, and a few minutes later, Oyarzabal made another huge miss, only for the coach to haul him off and bring Moreno into play.

On 80 minutes, Spain got the break, and of all the players, Morata, on as a sub, was the one burying a lovely goal into the Italy net after a neat one-two with Dani Olmo, firing past Donnarumma into the bottom corner to level the match.

Extra time it was, and apart from Italy having an offside goal, it was again very even, which led to the inevitable penalty shootout, and it was Alvaro Morata who missed the crucial kick, leaving Chelsea’s Jorghino to slot in one of the calmest penalties under pressure that you will ever see, as Italy beat Spain for the victory, and they will now face England or Denmark in Sunday’s UEFA Euro 2020 final at Wembley.