Man who restrained Westminster Bridge terrorist to be freed from prison 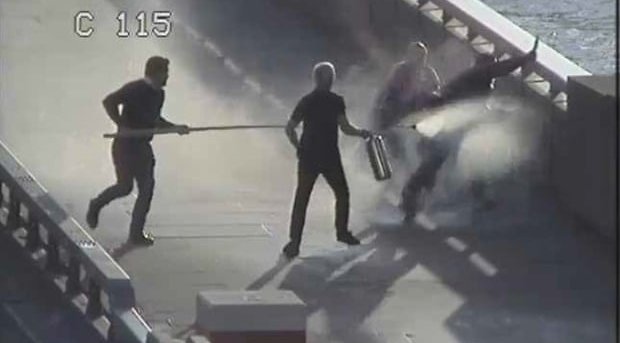 One of the men who tackled the Westminster Bridge terror attacker is set to be released from prison.

Steven Gallant was one of three men who restrained terrorist Usman Khan in an attack on Westminster Bridge in November 2019 in which two people were killed.

Khan was armed with two large knives and a fake suicide belt when he stabbed Cambridge graduates Jack Merritt, 25, and Saskia Jones, 23, and injured three other people before running onto the bridge.

Gallant was previously sentenced to life, with a minimum term of 17 years, for murder in 2005 when he killed a firefighter in Hull. At the time of the attack on London Bridge, he was on day release at an event for reformed prisoners at Fishmonger’s Hall.

When Gallant gave evidence at the inquest in April, he said he had “whacked” Khan with a narwhal tusk but was then left unarmed and the three men restrained Khan until armed police arrived at the scene on London Bridge.

The Queen cut his sentence by 10 months for his part in restraining Khan, however, the Ministry of Justice announced that that Queen had asked for the “Royal Prerogative of Mercy” to be used and a decision has now been made to release Gallant.

Of its decision, the board said: “After considering the circumstances of his index offending, his pattern of previous offending, the progress made while in custody, the details of the release plan and all the evidence presented at the hearing, the panel was satisfied that Gallant was suitable for release.”

Gallant has apparently been a model prisoner and has expressed his remorse for the 2005 murder, he has not faced any punishment or loss of privileges during his jail time for the past 10 years.

Conditions for his release will include a curfew, living at a designated address and complying with an exclusion zone to avoid contact with his victim’s family, according to The Guardian.