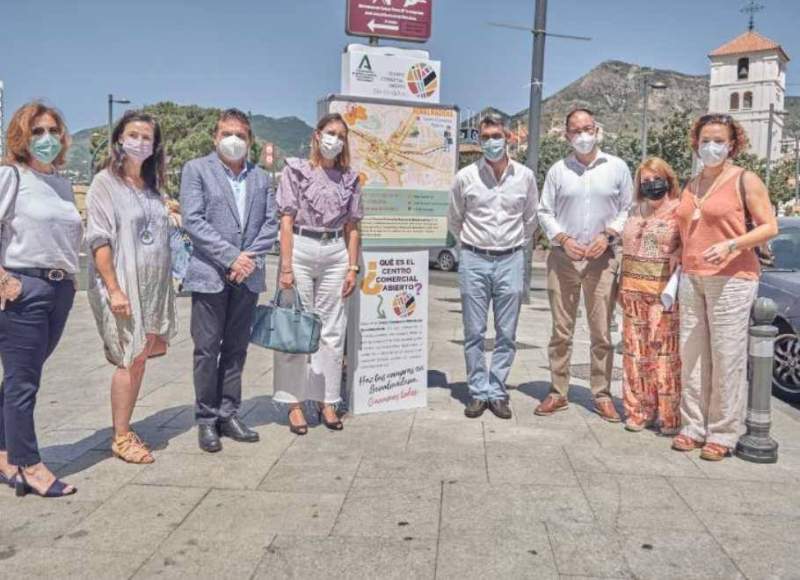 General Director of Commerce for the Board visits Benalmadena's Open Shopping Centre.

Victor Navas, the mayor of Benalmadena, and Javier Marin, the Councilor for Commerce, made a visit this morning Tuesday 6, to the Benalmadena Open Commercial Center Association (ACCAB), together with Lorena Garrido, the General Director of Commerce of the Junta de Andalucia; and Carmen Sanchez, the representative for Employment, Training, Self-Employment, Economic Transformation, Industry, Knowledge and Universities in Malaga.
Also in attendance were Jesus Fortes, the president of ACCAB ; Rosa Maria Gonzalez Rubia, the vice president;  and Susana Marquez, the manager of CCA Benalmadena.
Mr Navas pointed out, “In 2017 the Benalmadena Open Commercial Center Association was officially recognised by the Junta de Andalucia, a title that will have to be revalidated this August 2021, and which has been a boost both in innovation, business, and commercial culture in order to improve the image and quality of local businesses”.
He continued, “Many of these advances have been achieved thanks to the various lines of subsidies that have been received for this recognition as an Open Commercial Centre by the Board”.
Adding, “Now that it is time to revalidate that title as an Open Commercial Centre, what better way than to do it at the hands of the General Directorate of Commerce of the Board, whose highest representative is today in Benalmadena to know first-hand what improvements the improvements have resulted in, after various investments received by ACCAB”.
In response, Ms Garrido commented, “From Commerce, we collaborate with both the ACEB and the ACCAB, making it also extensible to the Junta de Andalucia to promote purchases in local commerce: it is very important to support and buy in nearby stores, because those responsible are the same people that we live together with, and thus we strengthen the social fabric of the municipality, in addition to providing a much closer and personal treatment”.
After the visit, a work session was organised that served to inform the Andalucian official of the projects that ACCAB has underway to promote commercial activity, as well as the initiatives and campaigns whose objective is to make known – both the citizens as well as merchants – the services and advantages that an area with a high concentration of establishments, such as a CCA, has.
A good part of these campaigns has been developed by the call for subsidies for associations promoting Open Commercial Centres, and these actions, which have involved a total investment of €21,659, are part of the integrated project, which aims to raise awareness among the population that now more than ever it is necessary to make purchases in the local community, and, on the other hand, publicise what the ACCAB is, and which shops and establishments are involved, through CCA identification totems.
Garrido and Sánchez visited various local commercial establishments that are a part of this group, and also took the opportunity to stroll through the surroundings of Arroyo de la Miel, recognized by the CCA as the most central streets to its initiative, and where there is a high number of businesses and entrepreneurs who are involved in the association.
Jesús Fortes, the president of ACCAB, said this meeting represented “one more support for this CCA project that we have been developing since 2003, and that we know benefits merchants in this environment in a very positive way”.
The ACCAB has the Official Recognition of the Junta de Andalucia, and in 2018 was the winner of the Andalucia Award for Internal Trade in the modality of open shopping centres, in recognition of commercial associations aimed at promoting, management, and promotion of the almost 122,000m² of businesses around the town that it helps to promote, as reported by 101tv.es.