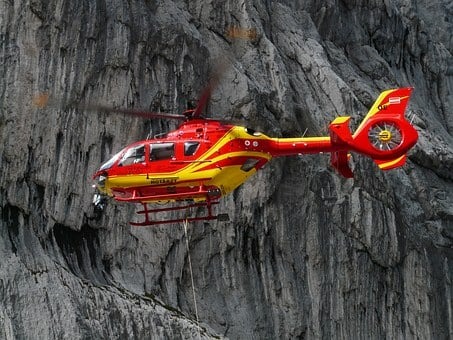 Climbing trip goes wrong and ends in a helicopter rescue as a climber was left with a fractured hip and an open femur fracture.
The mountain rescue team of the Guardia Civil were called out to rescue a climber who had fallen whilst climbing the Pared de la Virgen in Spain’s Granada. The climber was climbing a canyon near Velez-Benaudalla.
The canyon attracts climbers from miles away due to his impressive nature. The canyon is called El Tajo de los Vados, and the N-323 passes through it. Many climbers looking for an adrenaline kick climb solo in this area without ropes. There area does have iron rungs though to aid climbers who want to be safer.
The accident happened on July 5, at around 7:30 PM. The two climbers had been tackling a face of the gorge when one of them fell. The climber who fell suffered a fall of 10 metres. The other climber was not out of danger though and was left hanging from his rope and was not able to help the injured climber.
Emergency services rushed to the scene of the accident including an ambulance, the fire service from Motril, the Guardia Civil and the (SEREIM) mountain rescue team. A helicopter was also dispatched too.
The climber who was injured had ended up resting on a ledge but the helicopter was not able to get close enough to rescue the climber in situ. This meant that the helicopter had to ascend and send down a rescuer using a rope.
The climber was discovered to have an open femur fracture and a fractured hip. Rescuers were able to winch the climber to safety and he was transferred by helicopter to Granada’s PTS hospital.