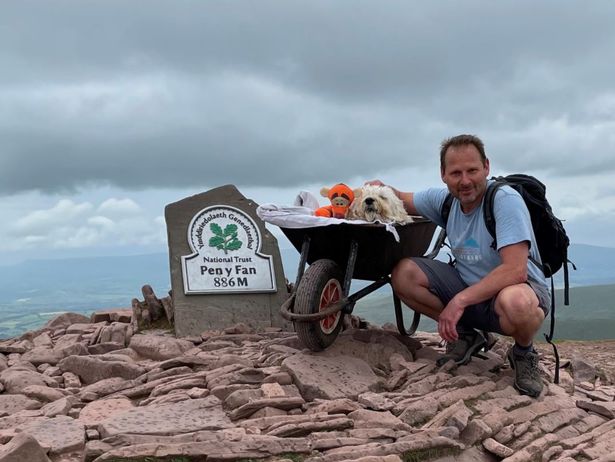 Carlos and Monty at the top of Pen y Fan

The owner of a Labradoodle dog dying from leukaemia pushed him to the top of Pen y Fan in a wheelbarrow.

The owner, Carlos Fresco, pushed his beloved Labradoodle dog to the summit of Pen y Fan in South Wales for “one final adventure together.”

Fresco, a hotelier from London, had 10-year-old Monty since he was a puppy and the two of them had always enjoyed long hill walks together in the UK.

When Monty fell ill 18 months ago, Carlos realised he should take Monty for one last adventure, according to Wales Online.

“At first Monty responded well to the chemotherapy, but sadly the leukaemia returned several weeks ago and he started fading fast,” said Carlos, 57.

“Then, at the end of last month, a mate of mine who lives in Brecon detached the retina in his eye and needed to get home from London. So I offered to drive him and took Monty with us.

“We ended up staying there for a week and Monty loved having a big beautiful back garden to stretch out in – which is where I stumbled across a rusty old wheelbarrow which I decided to dust off and oil up.

“The next day I put Monty in it on top of a load of blankets and started wheeling him to the top of Pen y Fan. He loved it and the reaction he got from other walkers was amazing. They all took turns in helping to push the barrow, and Monty really enjoyed that because he’d always adored people and being made a fuss of.

“I was bowled over by the kindness we were shown, to be honest – total strangers taking the time out to say ‘hello’ and lend a hand in getting him to the summit.”

Sadly, Monty’s health deteriorated whilst they were staying in Brecon and he passed away at the foot of Carlos’ bed a few days later.

“He hung on until the morning after Father’s Day – I peered over the mattress and he’d gone,” Carlos said.

“He looked so peaceful though and I’m glad we got to go on one last adventure together.

“He was a lovely little lad.”