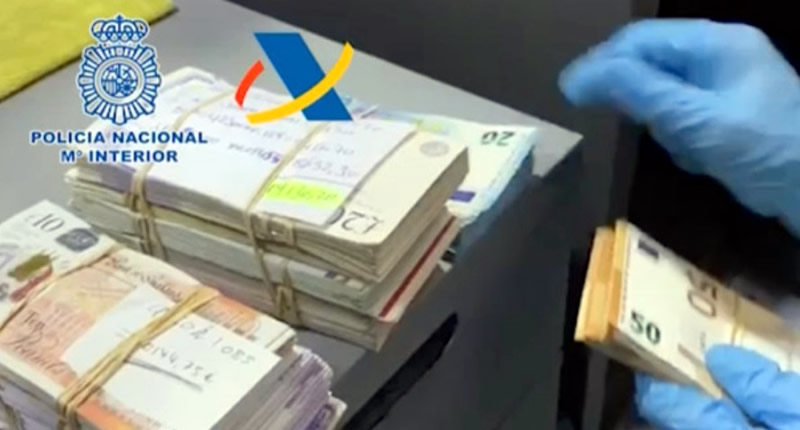 The National Police and the Customs Surveillance Service have in a joint operation dismantled a network of money exchange agencies in Fuengirola that has reportedly laundered more than £52 million (€60m).

According to a statement from the National Police, the exchange agencies were allegedly set up to appear to be operating as legal foreign currency exchanges to tourists, but their real clients were mainly British citizens linked to alleged criminal organisations dedicated to drug trafficking, with a network of 13 exchange agencies reported as being linked to the money laundering, and 21 people being arrested.

A total of around €562,657.76 (£483,837.07) has reportedly been blocked in various bank accounts, and seven properties, 21 vehicles, and a wide variety of financial products have been confiscated, along with €97,302 (£83,675.21) in different types of currencies.
‘Operation Wessel’ was launched in 2019 after the Malaga Customs Surveillance Service detected a disproportionate volume of British pound exchange that an agency in Fuengirola had reported, and once underway, the operation was expanded to incorporate the National Police’s Group III of Money Laundering of the UDEF.
Investigations revealed that while acting as legal money exchange agencies, their real clients were members of criminal organisations dedicated to drug trafficking based in the province of Malaga and Campo de Gibraltar, and comprising of British citizens, who needed this type of network to launder their money from drug sales, changing pounds into euros.
As a police spokesman explained, changing the currency into euros made it more viable with regards to introducing the money into Europe, and also make it easier to pay for the drug shipments that came mainly from North Africa, and for their transport and concealment, given the smaller volume the euro notes occupy.
During the operation, British pounds were intercepted, along with Irish and Scottish pound notes, with the police spokesman pointing out that it should be taken into account the limited area of the United Kingdom that the latter currencies would emanate from in a town the size of Fuengirola.

Once the currencies reached the main Fuengirola currency exchange agencies, they were distributed and dispersed among the network of agencies, which in turn, exchanged the money in other two higher volume establishments and in banking entities in which they had opened company accounts, pretending that they currency came from their legal activity.

The investigation reportedly proved the laundering of up to £52 million (€60m)by this network of agencies, in spite of the pandemic, during which the organisation had allegedly changed its way of operating, as there was a lack of tourists or other legal economic activity capable of generating such volume of money.

Current legislation on the prevention of money laundering places currency exchange establishments as obligated subjects, imposing the duty to examine, report, and refrain from any operation that may be related to money laundering, as reported by malagahoy.es.