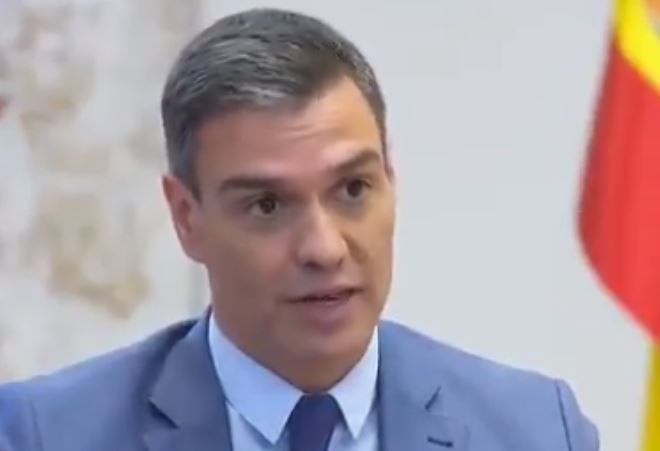 Pedro Sanchez press conference in Lithuania at a NATO military base interrupted due to a real threat from Russia.

Spain’s Prime Minister Pedro Sanchez was about to speak at the Lithuanian press conference when the incident happened. The press conference was taking place at the NATO military base in Lithuania. There is a contingent of the Spanish army there due to the threat from the Russian Air Force.

The Lithuanian president was speaking at the press conference when the alarm was sounded. This was just before Sanchez was due to speak. As reported by El Mundo the threat came from an unidentified Russian aircraft. Two Eurofighter jets were quickly launched to intercept and identify the Russian aircraft.

After a few minutes Lithuanian authorities said that the conference was safe to continue. At this point Sanchez began his speech, only a few minutes after the threat had been announced.

“We have seen a real case of what justifies the presence of Spanish troops in Lithuania,” said Sanchez, as reported La Sexta.

Sanchez is currently visiting the Baltic republics. During the trip he has visited the 130 plus troops that are deployed Lithuania’s Siauliai.

In other Spanish military news, the army in Spain returns to fight COVID and track positive cases amongst youths as cases continue to rise.

Sadly, in only 24 hours Spain saw over 17,000 new cases of the potentially deadly coronavirus. All of these infections need to be tracked by primary care teams who are exhausted after many months fighting the pandemic. The primary care teams are also working hard to return to face-to-face consultations with their patients too.

The Spanish vaccine programme is progressing well but cases are still continuing to rise. Summer is here, and many young people want to return to a life of normality and partying. Due to the increase in cases the Ministry of health has asked the Defence Department to provide troops to help track coronavirus infections. This is something that brings back memories of the beginning of the COVID pandemic.