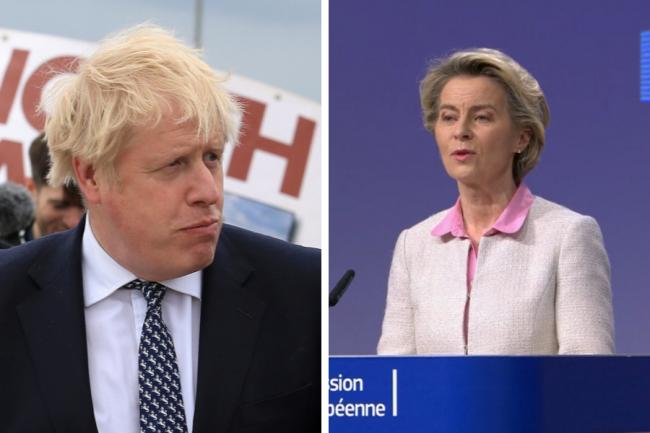 Boris Johnson has been urged to reject the €47.69billion Brexit divorce bill and issue the EU a final ultimatum over it’s outrageous demand.

The Leader of Reform UK, Richard Tice, has urged Boris Johnson to defy Brussels’ money-grabbing outrageous demands and instead “turn the tables on the EU” and hand Ursula von der Leyen an ultimatum.

Brexiteer Richard Tice has urged Boris Johnson and Lord David Frost to “stand up to Brussels” once and for all. Earlier today, Friday, July 9, Downing Street rejected Brussels’ suggestions that the final Brexit divorce bill settlement should be £2billion – €2.34billion more than previously agreed. The Government had estimated that the total amount owed to the EU was between £35billion – €40.91billion and £39billion – €45.58billion however, the EU is claiming the “correct” amount is actually £40.8billion – €47.69billion- no small change!

TalkRADIO host Mike Graham said: “Why would we bother paying fines to the EU?”

Mr Tice responded: “We are going to keep seeing these stories. Until the EU come to their senses and play ball on the issue of the Northern Ireland Protocol, I wouldn’t pay them anything. I would give them a really, really short time frame otherwise we have got to scrap the protocol and start again.”

Mr Graham said the UK “might as well scrap the whole thing and say no deal at this point”.

“Boris and Lord Frost have to stand up to the EU now and say they are not going to pay any more money. The EU has got to sort out this Northern Ireland Protocol. Until that is done just press the pause button on everything else. We should turn the tables back on them and say ‘sort out of the protocol in a couple of weeks or we are done’. They have got to realise we are a sovereign independent nation. We are going to thrive. We have a great opportunity here,” added The former Brexit Party MEP.