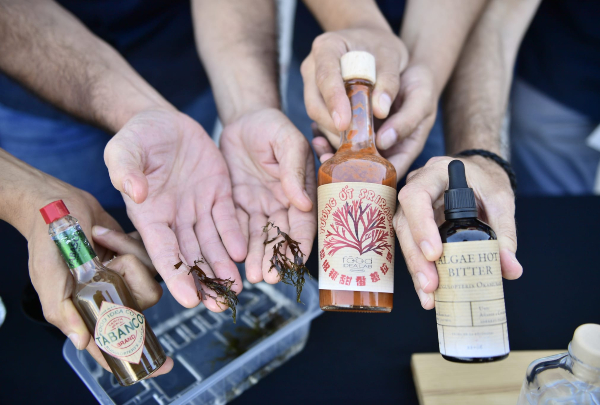 An innovative chef has made a hot sauce from invasive algae blighting the shoreline of southern Granada.
Chef David Chamorro has unveiled two hot sauces made from Rugulopteryx Okamurae, an invasive Asian alga which has been blighting the coast of Motril and elsewhere for almost a decade.
In January, Motril council called for urgent action to prevent the algae from making a “catastrophic” take over the coastline, but the algae now threaten the entire Andalucian coastline. The algae spoils coastlines rendering them unusable for fishermen and holidaymakers alike.
Scientists on Tuesday, July 6, called for innovative solutions to the encroachment including devising ways in which the algae could be used as food.
While not the most likely of ingredients, renowned chef David Chamorro, who runs the Food Idea Lab, devised a way to make the algae into two different types of hot sauce.
“Considering its sea flavourings, in the first place, and also its bitterness and spiciness, it seems like a seaweed that doesn’t want to be eaten,” he said.
But it was the algae’s spiciness, which Chamarro said is unusual for most sea-grown plants, that inspired him to make a condiment from it.
Cooking up two sauces, a sriracha sauce and a Tabasco-type sauce called ‘Tabanco’ in homage to the typica bars of Jerez, Chamarro said, “These are products which can be used by the gastronomy industry, but they’re also products which can assist in pointing out a serious problem. We’re doing our bit to help out.”