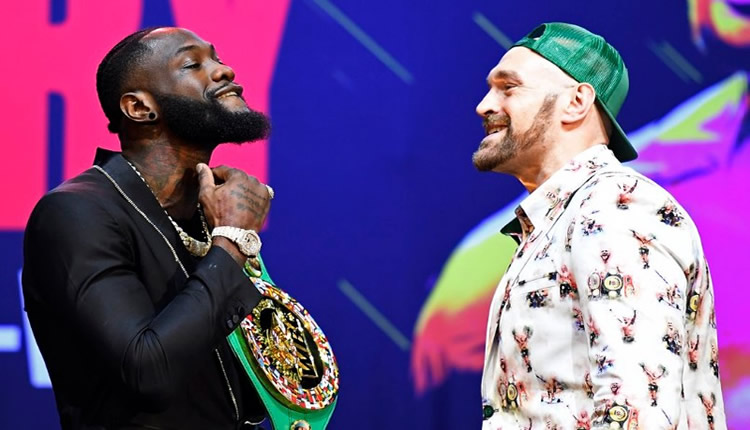 According to different reports coming out of the United States, there is confusion surrounding the fight on July 24 between Tyson Fury and Deontay Wilder, as to whether it has been postponed or not, after members of Fury’s training camp –  including Fury – have reportedly tested positive for coronavirus.

Dan Rafael and The Athletic have both tweeted that the fight has been postponed, while Top Rank, Fury’s promoters, said on Thursday 8, “We continue to monitor the health status of Tyson and his team, and the status of the event has not changed to date”.

ESPN had been the first on Thursday to report that the fight was in jeopardy, and according to Dan Rafael, an official had conformed to him that members of Fury’s camp had tested positive, and that Tyson himself was “sick, but not that sick”, but that they are all “realistic about what this virus can potentially do”.

Rafael said he had been informed that Tyson had received his first vaccine jab, but not the second one, and Sky Sports have reported that Wilder’s camp refused to comment on the situation.

The third fight in the Fury – Wilder trilogy was due to happen on July 24 in the T Mobile Arena in Las Vegas, according to The Athletic dates at the Arena to reschedule this fight are realistically not available until at least October, with the Manny Pacquiao vs Errol Spence Jr clash taking place on August 21, and the UFC apparently having the venue booked over Labour Day weekend of early September.

A rescheduled bout would not want to clash with the big Anthony Joshua and Oleksandr Usyk fight, with Joshua defending his defend his IBF, WBA, and WBO titles, which is yet the be confirmed for September 25, so that means October would be the earliest possible date, but first we need to clear up the current confusion over Fury vs Wilder happening in July or not.