Jade Jones reveals how Flint gave her the fight to win 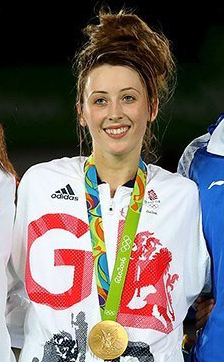 Jade Jones is already Britain’s greatest ever Taekwondo fighter and landed her first gold as a 19-year-old in London’s 2012 games. Now, an exclusive BBC Wales documentary reveals what got her to this historic moment and shines a light on the family and community that made her.

Jade Jones: Fighting For Gold, directed by Stewart Sugg captures Jade at home in Flint with her family and her preparations for Tokyo 2021.

Candid interviews with Jade and her family describe a “rough and tumble” childhood, where Jade was “kind of dragged up almost”. She was a mischievous, cheeky child who got in with the wrong crowd, and onto the wrong side of the law, until her grandad stepped in.

“I did start going down the wrong path, hanging out with the wrong people. It was my grandad that had seen that, and wanted to get me going in the right direction. It was martial arts he wanted to get me into just ’cos he knew it teaches respect, discipline,” Jade said.

Jade credits the close community in Flint as the place her journey started. It’s also the place where Jade’s father Gary – whom she calls a “Jack the Lad” – collects scrap metal and cockles in the area. As Jade joins him on his scrap collecting route, just as she used to as a child, he describes how he sees a lot of himself in his daughter: “Jade, when she was a kid, was more of a lad than a girl. I really thought I had a lad. I think we’re the same person to be honest… she’s fiery, I’m fiery.”

Looking ahead to the competition in Tokyo, Jade says: “It’s going to be tough, and that’s why no one’s done three golds back to back. On my day I believe I can do it. It would just be amazing to get that gold as well – the story literally would have been perfect.”