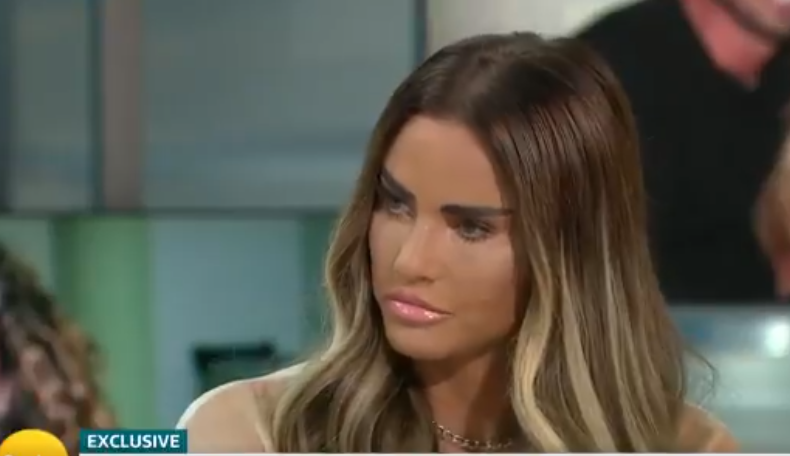 Katie Price appeared on GMB this morning to reveal details of her new plastic surgery, which includes a ‘bum lift’ and facial surgery such as lip and eye lifts.

Since having the surgery last month in Turkey, Price has hidden her face on social media posts and hasn’t been seen in public until yesterday when she was seen walking her pet chihuahua, as seen in The Sun’s exclusive photos yesterday.

Those who saw Price on GMB this morning talking about her most recent surgery took to Twitter to give their opinions – not only on how she looks after the surgery but the fact that Price had flown over to Turkey to have the procedures.

Katie travelled to Turkey, which is on the travel red list, to get cosmetic surgery.@KatiePrice says she's had both vaccines and 'didn't muck about'. @DrAmirKhanGP commends Katie's honesty about cosmetic surgery but is critical of her travel to a red country. pic.twitter.com/9kZFa2g85b

One Twitter user said said “Katie Price flies to a ‘red’ country, gets plastic surgery, flies to an ‘amber’ country to isolate in a private villa for a week, flies back to the UK and gets the spotlight on national TV. Not bad for someone who is bankrupt, apparently.”

Whilst another said “Katie Price I thought you couldn’t get any more selfish. But, if you want to look ‘good’ it’s ok to fly to a red country while all of us ‘non bankrupt’ people are struggling to make a living to pay our bills. Might give the bankruptcy people a bell if that’s the life I can have!”

Price has recently been under pressure to pay off the £3.2- (€3.70) million debt after a failure to attend meetings and address paying back the losses. A source told The Sun: “Katie is due back next month – the debt is huge and it’s unlikely she’ll be able to pay it all back.

“She hopes the court is understanding in why it’s been slow progress.”

Price has defended herself by claiming that the surgery was part of her “work” and that she and her family followed all of the Covid protocols.

GMB’s Dr Amir wasn’t convinced “With all due respect, I’d say we have to prioritise the health and lives of everyone around us,” he replied.