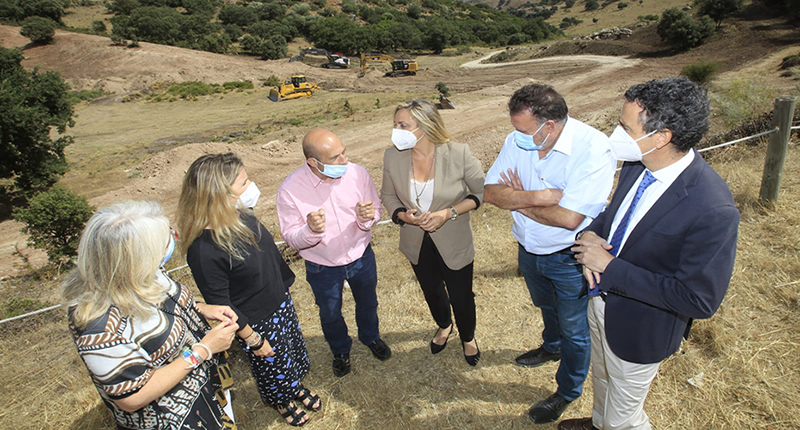 Marifran Carazo, the Minister of Development, Infrastructure and Land Management, today visited the site of the works where a new access road into Alcala del Valle from the A-384 will be created.

Ms Carazo thanked the engineers who had carried out the technical work that now makes it possible for this project to be carried out, after it had been stalled back in October 2018 when a series of obstacles were uncovered that led to its suspension at the time, which has now been resolved.

A budget of €10,131,379 has been allocated for the project by the Ministry of Public Works, and it is hoped that the new road will reduce the high number of accidents that occur on the existing narrow stretch of road, which forces lorries and buses to constantly cross into the opposite lane, with steep 180-degree curves, no hard shoulder, and continual problems with flooding.

The minister pointed out that it was “evident that there is a risk to road safety”, and that despite the suspension in 2018, the Ministry “has persevered until it found the formula to be able to tender and award the work again”, indicating a hope that the better road will lead to a greater economic benefit to the municipality, while also making it easier for the lorries who transport one of the area’s main produce, green asparagus.

Acciona Construccion has a period of 20 months in which to complete the 3.8km long stretch of road, which includes a variant of the current provincial highway CA-9107 that leads into Alcala del Valle, and will begin with a new T-shaped junction at Km0 + 230 of the CA-9107 and will end at a newly built intersection with the A-384 Arcos-Antequera road at Km76.

This new section of road, with fewer curves is designed to improve connections with other towns in the vicinity, with which it has joint services, and also to access the Virgen de las Montañas de Villamartin regional hospital, as reported by juntadeandalucia.es.