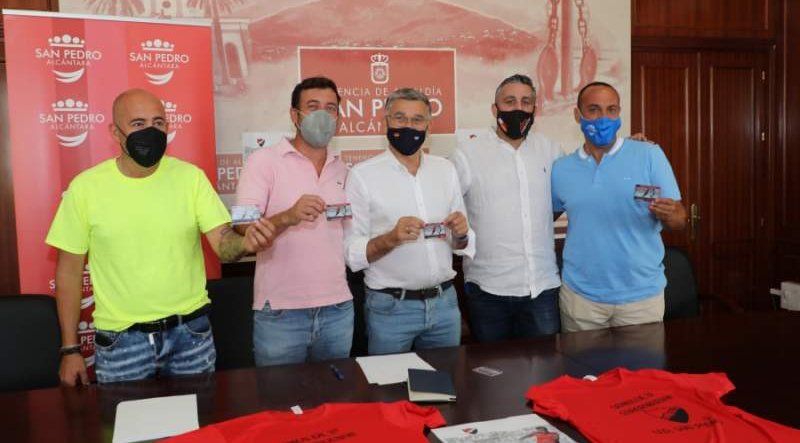 The Deputy Mayor of San Pedro Alcantara, Javier Garcia, has shown the support of the Council for the season ticket campaign launched by UD San Pedro.

Under the slogan ‘We have returned’, the UD San Pedro campaign’s main objectives are to consolidate the union of the club with the fans and get 500 new members for this season. Garcia said that “the team has achieved a real heroism with their promotion of the Third Division and, for our part, the support is absolute because it is the reference club in San Pedro and is developing a meritorious job with the training of the youth players”.
Alcantara thanked the City Council for its support and explained that “after a difficult year, it is time to take advantage of the opportunity to enjoy professional football and, after promotion, we ask the people of San Pedro to bet on the club because we are convinced that it is a winning combination”.
He also stressed that “we believe that it is necessary to consolidate the project, not only in the sports field but also in the social field as a stable hobby”. He has announced that the club will raffle a tablet among all the members if it reaches the set objective and has specified that the subscription allows them to attend all the matches of the season of UD San Pedro and the quarry teams, as well as enjoy discounts and benefits.
“The management team has decided to maintain the previous prices, given the social and economic situation in which we find ourselves”, so the general payment for the entire season will be 50 euros, a stand will cost 100 euros and a box of 300 euros.
Those interested may become members in the club’s own offices, from 5pm to 8pm from Monday to Friday, by sending a message to the different social networks of the entity, or by calling 669 73 51 60.