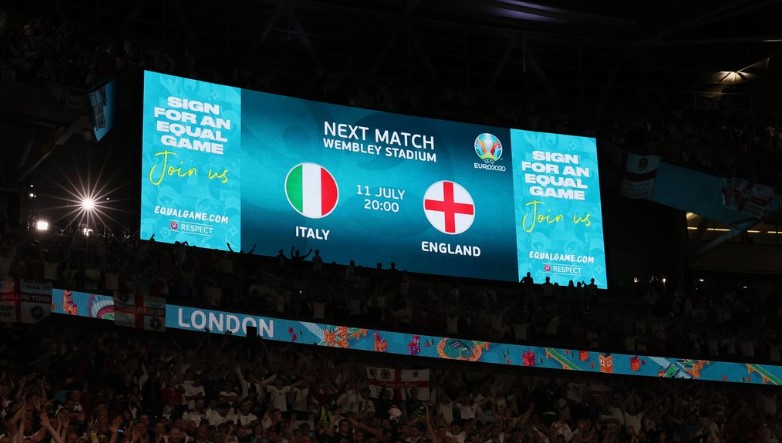 A pair of tickets for Sunday night’s historic Euro 2020 match at Wembley Stadium have been found for sale on the ticket tout website, Ticombo, being offered at an incredible £54,000 each, according to dailymail.co.uk.

Sunday night’s match against Italy will be the first time that England has played in a major football final since the World Cup victory over West Germany back in 1966, and the demand for tickets has gone through the roof for obvious reasons, with Uefa saying that tickets for this match, from their official website, had already sold out last week.

This means the only tickets that could now be available will be from people who have already purchased them and are now trying to cash in on the huge demand from fans wanting to attend what could be England’s first tournament win in 55 years.

Tickets have been appearing for sale on Ebay, social media, and high-profile ticket resale websites, with the two tickets for Sunday’s game found by the Mail yesterday costing £295 originally, but now on sale for 180 times their face value, at £54,000 apiece, and incredibly, that price included an £11,000 booking fee.

On another ticket website called Live Football Tickets, hospitality tickets had allegedly been found selling for £40,000 each, with other sites also selling tickeys ranging from £5,000 to £30,000, but the big dilemma for anybody thinking of purchasing them is, are they genuine.

Uefa has already issued a warning that anybody arriving at Wembley with a ticket from an unofficial website could well be refused entry, with Adam French, from consumer watchdog Which? warning, “England’s win over Denmark has understandably kicked off an almighty scramble. We’re seeing tickets for sale on websites or via secondary sellers for thousands of pounds2.

He continued, “Even though some of these websites claim to offer tickets from 100 per cent trusted sellers, this is often not the case”, while Adam Webb, from the campaign group, FanFair Alliance, reported, “Rogue ticket tout websites continue to buy their way to the top of internet search results, misleading buyers, and give highly controversial businesses an undeserving cloak of legitimacy”.

He added the problem is that most of the websites are registered outside the UK, so it would be virtually impossible to try to claim your money back if you ended up with a fake ticket.