Baena farmer under investigation in Cordoba for laying poisoned baits 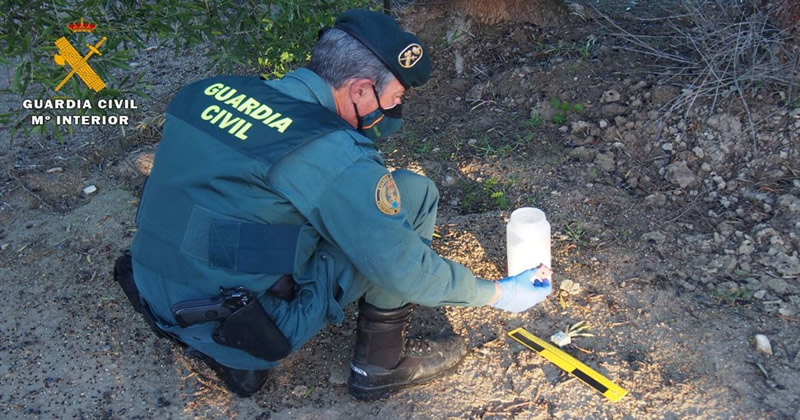 Guardia Civil Seprona officers, in conjunction with Environmental Officers of the Junta de Andalucia, are investigating a farmer in Baena who is suspected of crimes against fauna, for his alleged responsibility in the placement of poisoned baits on his farmland.

An investigation was launched after officers of the Baena Seprona unit became aware, through a notice from the Environment Agents of the Junta de Andalucia, that several poisoned baits had reportedly been found inside a hunting reserve.

Seprona officers, accompanied Environmental Officers travelled immediately to the location where the baits had appeared, where they located and removed a considerable quantity of poisoned baits that were scattered on the ground, which, after analysis, were found to contain an extremely toxic active substance, with a highly destructive efficacy.

As the investigation developed, it soon led to the identification of the person responsible for laying the poisoned baits, who was carrying out agricultural work in the field and claimed the baits were laid to avoid damage by voles – Microtus arvalis – that were known to inhabit the fields.

After obtaining sufficient evidence of the alleged involvement of this person the man was investigated as the alleged perpetrator of a crime related to the protection of flora, fauna, and domestic animals, by the placement of poisoned baits in an open space, that any animal of the local wild fauna could easily have ingested and died.

Within the laws of pest control, Seprona points out that the placement of poisoned substances in public places should only be carried out by duly authorised personnel, under strict supervision and regulatory conditions, with the offending pests brought to the attention of the corresponding administrations and treated by professionals in the sector, as reported by lavozdecordoba.es.