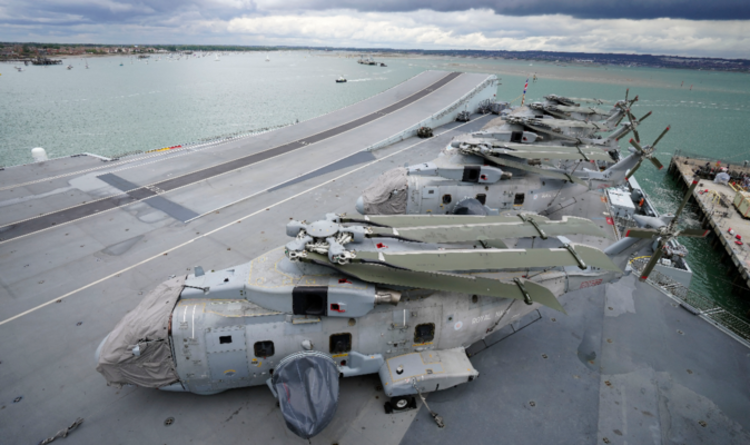 THE ROYAL Navy has deployed specialist sonobuoys to look for a Russian submarine that had been stalking British vessels, according to reports. At this moment in time, no one knows exactly where it is or even why it’s there, sparking war fears among Britain’s top brass.

Tensions in the region soared after Royal Navy helicopters began a search for a Russian vessel that appeared to be stalking HMS Queen Elizabeth and the Royal Navy’s Carrier Strike Group (CSG), the Telegraph reported. The submarine-hunting aircraft were deployed as the British fleet transited the eastern Mediterranean.

The Russian submarine is believed to be a Kilo-class diesel-powered attack vessel from the Black Sea fleet and is believed to have been stalking HMS Queen Elizabeth and her carrier strike group since she sailed off Cyprus last month.

The Royal Navy scrambled warships in the past to intercept Russian ships in the English Channel to ensure the “nation’s security.”

In June last year, the Russian task group sailed up the English Channel to the North Sea and were shadowed by the Royal Navy.

Two weeks before that, Russian warships and a submarine hunter destroyer were seen sailing through the Dover Strait.

The Royal Navy said in a statement said, “Patrol ships HMS Tyne and Severn were on hand to constantly observe the same warship, plus corvette Vasily Bykov and two support vessels as they headed in the opposite direction.

“The Portsmouth-based ships intercepted the Russian ships on the edge of UK’s area of responsibility and remained in company with the quartet through the English Channel, through the busy Dover Straits and into the North Sea, handing over to the Belgian Navy when the force entered their area.

“The submarine-hunting Kulakov is based with the Russian Northern Fleet on the Kola Peninsula, while the Bykov had sailed all the way from the home of the Black Sea Fleet in Sevastopol, Crimea.”