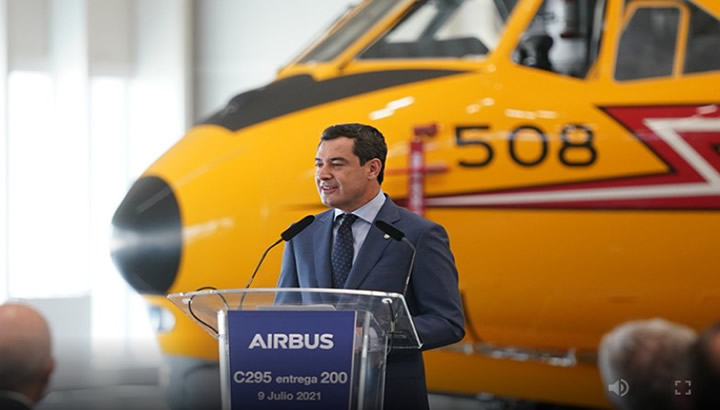 Juanma Moreno, the president of the Junta de Andalucia, accompanied by Rogelio Velasco, the Minister of Economic Transformation, Industry, Knowledge and Universities, attended the Sevilla plant of Airbus, where they oversaw the delivery of the 200th of their C295 aircraft.

The president of the Board met at the plant with Alberto Gutiérrez, the president of Airbus Spain, where he defined the aerospace sector as key in the economy, and strategic for the progress of Andalucia, by occupying the first positions in exports, while contributing a growing percentage to the GDP of Andalucia.

Mr Moreno also stressed the importance of maintaining employment as an essential element to emerge stronger from the crisis we are going through as a result of the Covid-19 pandemic, pointing out that Airbus is one of the most important aerospace centres in Europe, having a powerful research ecosystem, with more than 143 companies that invoice close to €3,000 million, which translates into some 14,500 stable and mostly highly qualified jobs.

He added, “Once again, the Andalucian government has complied with the sector, with its word, and with facilitating the ways for the progress of this land. Andalucia is the first community to have a comprehensive aerospace planning instrument”.

Also, he explained that steps are already being taken to prepare, together with other officials in the sector, Sevilla’s candidacy to host the new business incubator of the European Space Agency, the ESA Business Innovation Center.

Only this week, the Board approved an aid package of €15 million with the aim of insufflating the economic oxygen that the aerospace fabric requires, with direct aid to companies that are having a bad time, of up to €300,000.

Finally, Mr Moreno stated that “Andalucia is a benchmark for aerospace, and has made the Airbus project strong since its inception, due to its human capital, and that cannot be relocated. If Airbus is what it is today, it is largely due to the work and effort of Andalucian engineers and their talent”.

Concluding, “We would like, within that fluid relationship we have, to participate in making decisions about the future. From the Puerto Real factory we believe that the reinforcement of the El Puerto plant could be a great opportunity to make it a benchmark in green hydrogen projects”, as reported by juntadeandalucia.es.