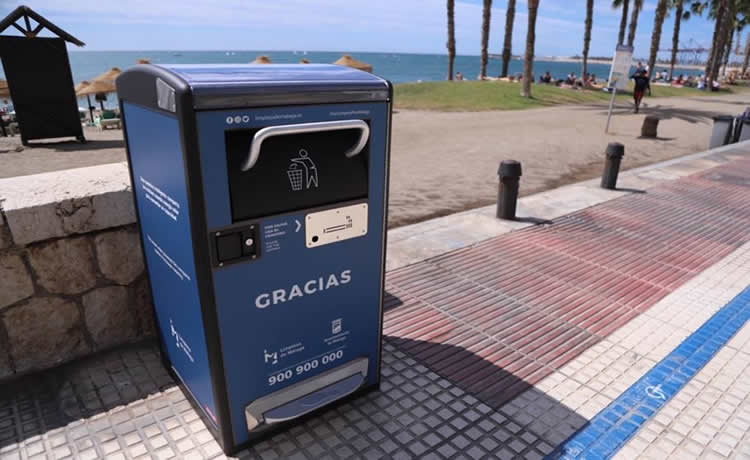 Francisco de la Torre, the mayor of Malaga, together with Teresa Porras and Susana Carillo, the councilors for Beaches and Operational Services, and Urban Innovation and Digitalization, accompanied by Alejandro Arderius, the director in Spain of the Sulo company, on Friday 9 presented the pilot project that will allow Malaga city to have a total of 100 solar compactor bins.
The mayor explained that these are innovative pieces in which new technologies are put at the service of caring for the environment, to obtain savings in the frequency and cost of rubbish collection, as well as cutting CO² emissions.
La Malagueta beach will have the first units that are planned to be installed on the city’s promenades in this initial phase of the project, with 20 bins already being installed last Wednesday 7, with the remaining 80 to be installed throughout the month of July.
These are Bigbelly brand smart litter bins, distributed in Spain by Sulo, and powered by solar energy, incorporating state-of-the-art technology, with the aim of saving costs, time, and work, and these new solar bins are capable of reducing the number of collections by an average of 86 per cent, therefore reducing the cost associated with collection by 50 per cent.
When the waste inside the bin reaches the level of the fill sensors, an internal compactor powered by a solar module on top of the bin compacts the waste, and in this way, the container can store around 600 litres of waste.
This bin model stores five times more than the traditional 120-litre rubbish containers, and come equipped with sensors that monitor and report fill levels and collection activity, while also taking advantage of solar energy to compact waste and communicate its status in real-time.
The Bigbelly system that they have incorporated allows to reduce CO² emissions, avoid garbage overflows and the access of rodents or animals to it, elimination of odours, and the reduction of plastic bags.
Each unit incorporates a SIM card inside the bin that allows them to be geolocated with the exact location, while the CLEAN associated management software, is compatible for integration with other systems through open API, and allows to optimize the collections and be more efficient, as well as generating the required reports to improve the management and productivity in the collection of waste.
Its design features a pedal opening so that there is no need to use your hands, which facilitates its use and reduces the risk of virus transmission, also incorporating an ashtray located in the main door, without direct contact with the rubbish, to avoid fire risks, and it has a capacity for approximately 2,000 cigarette butts.
This system is already installed in other European cities, with a total of 60,000 units in operation, with Malaga one of the few Spanish cities to have this state-of-the-art system, together with Madrid, Valencia, and Palma de Mallorca, among others.
This Malaga pilot scheme will last six months and will not entail any cost for the City Hall, since they have been provided free of charge by Sulo, then after this period, the efficiency of the system as a whole will be assessed.
“The normal thing is that progress is made in this direction, we have to see if human resources used for rubbish collection can use their time on other issues”, said the mayor, stressing that this move was not about reducing personnel, but of “making better use of human resources”, as reported by 101tv.es.