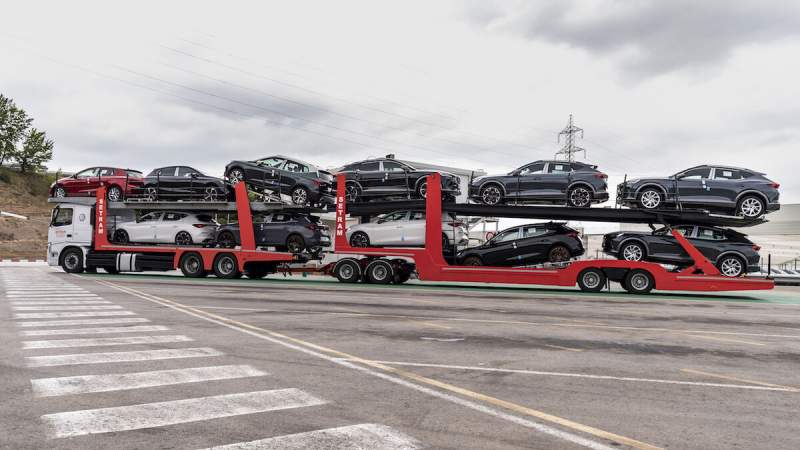 Seat and Setram launch the first giant vehicle transporter in Spain capable of carrying 10 to 11 cars.

Seat and Setram hope to be at the forefront of sustainable road logistics by launching the first giant vehicle megatruck vehicle transporter in Spain.

Until now, the company used this type of truck to transport parts. From now on, it will also be used for the road transport to the Port of Barcelona of cars manufactured at Seat Martorell, thus reducing the number of journeys and, therefore, improving the economic and environmental impact.

The megatruck has a total length of 25.25 meters. It adds a load capacity of 10-11 cars, depending on the mix of models, compared to 8-9 of the traditional so-called “road train”. Its annual transport volume is more than 8,600 vehicles, which represents an improvement in daily productivity by 12%.

Compared to a conventional 4-axle truck, the megatruck allows a reduction in CO2 emissions of 10% per journey and a reduction in logistics costs of 11%. The main reason for this reduction is the improvement in the efficiency of fuel consumption per ton transported, as the load capacity is increased by 4.75 meters in length, which allows up to 3 more cars to be loaded.

Herbert Steiner, Vice President of Production and Logistics of SEAT SA, has pointed out that “the megatruck eliminates 500 truck circulations a year in city rounds and reduces 5.2 tons of CO2 emissions per year, which implies enormous advantages in terms of sustainability, environment, road safety and efficiency. With the megatruck and rail transport, our main logistics route to the Port of Barcelona, ​​we are making steady progress towards a maximum reduction of the carbon footprint in vehicle transport ”.

Seat used a duo-trailer for the first time in 2018 in an experimental phase for the transport of materials, although two years earlier it had already released the first giga-trailer (the “little brother” of the duo-trailer), also in the testing phase.