Torremolinos Local Police to get a new headquarters 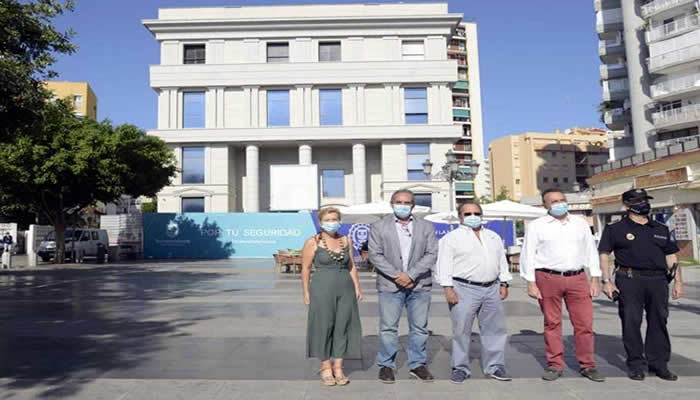 TORREMOLINOS Local Police to get a new 4,000m² headquarters in the centre of the town

Jose Ortiz, the mayor of Torremolinos, accompanied by Antonio Ruiz, the Security Councilor, and Jose Miguel Avila, the chief inspector of the Local Police, reported today, Friday 9, that the old, unused, and partially-finished large building in the centre of the town, in Plaza Picasso, will house the new Headquarters of the Torremolinos Local Police.
At present, their headquarters is located next to the Town Hall, in the El Calvario neighborhood, with the mayor explaining that due to the dimensions of the larger building, it will allow it to house exhibition rooms for cultural use.
“This unused building has deteriorated over time. We have seen the real and functional needs of both the centre, and the city, and we see that the proximity of the Local Police to the historic centre, as well as being able to offer our neighbours the possibility of approaching the centre to carry out administrative activities, is the most functional and sensible at this time”, said Mr Ortiz.
Adding, “we defend the responsible management of the resources we have, prioritizing and being useful to the citizens”.
At more than 4,000m², construction of the old building began a decade ago, before being stopped by the then Torremolinos government, before it had been completed, after a large investment had been made in it, which had not been put into use reportedly due to budget problems and imbalances related to the work and the time of completion.
It is a situation that the current municipal government had been trying to solve for years with different proposals, until finally, it is solved with the transfer of the Local Police Headquarters to the building.
Said Antonio Ruiz, “It is essential and necessary since the current police headquarters building is very old, and does not meet the minimum conditions to offer a dignified service to citizens and to the body itself. The fact that the building has been standing empty for so many years, and in the face of unsuccessful attempts to use it without success, make the option of proposing the transfer of the Local Police here the most viable”.
Finally, chief inspector José Miguel Ávila explained that the new facilities will include a gym, and a virtual shooting room, among other services that the current police station does not have right now.
With plans to expand the current local police force staff of 149 next year, the police chief said, “The Police must be in the closest place to which citizens can go to make a complaint. and we believe that this building is the best option at this time”, as reported by 101tv.es.