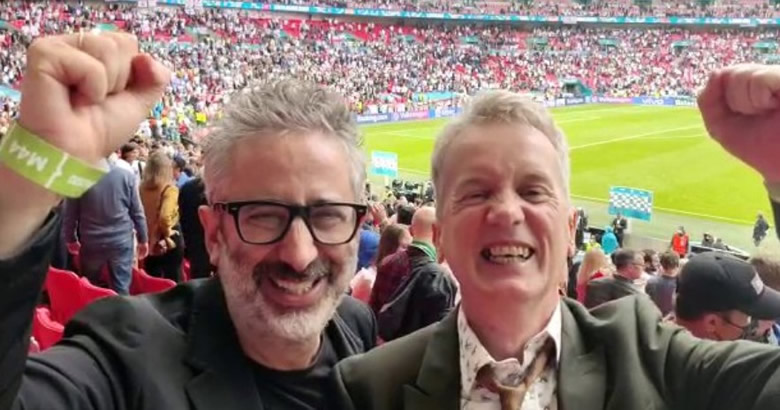 According to comedian Frank Skinner, UEFA has allegedly stopped Baddiel & Skinner from singing their No1 hit song, and football anthem, ‘Three Lions (It’s Coming Home)’ live on the pitch this Sunday at Wembley Stadium, ahead of the Euro 2020 final.

Skinner mentioned the topic during last night’s (Friday 9) ‘The Last Leg Euros Special’, telling the host, “There was a suggestion that we sang it on the pitch before the final on Sunday, and Uefa said it was too partisan and not fair on the Italians to have that”.

He continued by pointing out what had happened in the Olympic Stadium in Rome before the first match of Euro 2020, where Italy were taking on Turkey, “In the opening game, which was Italy against Turkey, Andrea Bocelli sang Nessun Dorma before the game!”, accusing Uefa of double standards.

The song by comedians David Baddiel and Frank Skinner was first recorded with rock band Lightning Seeds, and released to coincide with the Euros being played in England, and it went on to be a huge No1 hit song. At the time, the two comedians were the presenters of the football comedy show Fantasy Football League and they wrote the lyrics, while Lightning Seeds frontman Ian Broudie composed the tune.

A little-known fact is that the original lyrics had to be changed, as the FA were not happy with the line “Butcher ready for war”, which referred to Terry Butcher‘s head injury during a 1989 World Cup qualifier with Sweden, so the lyrics were changed instead to “Bobby belting the ball”, although Baddiel later revealed a handwritten copy of the original lyrics on Twitter.

The “ready for war” lyric was in fact included in the re-released version of the song in 1998, which that time was made in reference to Paul Ince, and the crowd noise at the intro of the track is in fact the sound of Brøndby fans recorded by Ian Broudie at Anfield during a UEFA Cup tie in October 1995.

Whatever happens, the pair will still get to perform their song this Sunday, as they will be staging a one-off gig at London’s 229 music venue in Great Portland Street, along with the Lightning seeds, in a 30 minute set just for England fans.