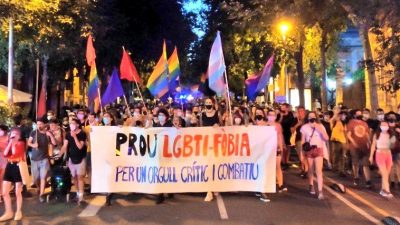 AROUND 90 per cent of homophobic crimes in Spain are not reported to police, according to new figures.

The Organisation of the State Federation of Lesbians, Gays and Transsexuals (FELGTB) found that between 80 and 90 per cent of homophobic crimes in Spain is reported.

Ignacio Paredero, secretary of FELGTB said that LGTBIphobia is a rising trend that is reflected in recent years, with crimes growing by 23 per cent between 2016 and 2019.

According to data from the organization, between 80% and 90% of victims of LGTBIphobia cases decline to file a complaint with the courts. One of the reasons, according to Paredero, is that judges tend to lack training to deal with this type of hate crime, which also happens in cases of gender-based violence.

He said: “Only one in ten attacks is reported. It is very difficult for a sentence to apply the aggravating factor of hatred to sexual diversity. The judge considers that insults and homophobic attitudes are an inherent part of a fight or a conflict. Distrust towards security forces and bodies, fear of reprisals and fear of not being believed determine the phenomenon of under-reporting.”

According to the latest report on the evolution of hate crimes in Spain from the Ministry of the Interior, 1,706 crimes of this nature were registered in 2019. Of these, 278 were over sexual orientation and gender identity, representing 16.3 per cent.

Transsexuals, despite being the smallest group of the entire LGTBI collective, are the most vulnerable victims.

According to data from the FELGTB, more than 40% trans people had suffered threats in 2018.

The news comes after police arrested a fourth person over the alleged homophobic murder of Samuel Luiz in La Coruña.

According to the National Police, the fourth suspect is aged between 20 and 25 years-old.

National Police officers in the Spanish province of La Coruña on Tuesday 6, previously arrested three young people aged between 20 and 25 years old, who are all residents of La Coruña, in connection with the death of Samuel Luiz in the city last weekend.

After investigating officers analysed security camera footage of Coruña promenade where 24-year-old Samuel was brutally beaten in the early hours of Sunday 4, they identified and located the perpetrators of this crime, and arrested them.

Samuel was killed after he reportedly called a friend and the group of young people nearby had seen Samuel using his mobile phone and allegedly thought that he was recording them.

The 24-year-old was beaten and later died in hospital from his injuries.