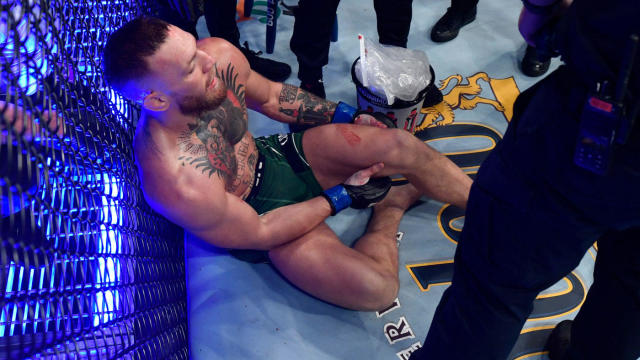 Conor McGregor suffers horrific broken ankle in first round and career in HUGE doubt as he losses to Poirier at UFC 264.

CONOR McGREGOR has suffered a crushing defeat to Dustin Poirier after brutally injuring his ankle in the first round of the trilogy fight. The Irishman and Poirier settled their series decider in the UFC 264 headliner in Las Vegas.

McGregor made a fast start to his third meeting with Poirier but was soon in trouble on the canvas when he failed with an attempted guillotine.

Poirier dominated from top position before allowing McGregor to stand up. He threw and missed with a punch and fell backwards when his ankle appeared to snap. He fell to the ground and was unable to continue with the fight awarded to Poirier as a TKO.

McGregor was bidding to avenge his January defeat by Poirier when he was stopped in the second round in Abu Dhabi. The former two-weight champion insisted the rivalry is ‘not over’ as the pair were STILL trading words post-fight.

UFC legend Jon Jones was among those to send McGregor well wishes, but casting doubt over his fighting future. Jones, 33, tweeted: “Man, I wonder if he will ever fight again after this.. heal up champ, this is terrible.”

Before the fight, McGregor sounded like the same confident fighter he’s always been.