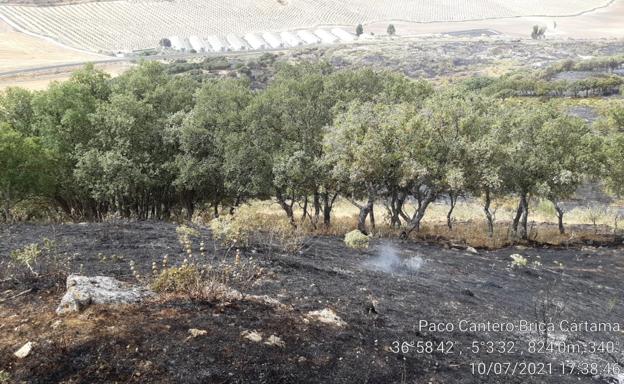 A FOREST fire in Jubrique, Malaga, has forced emergency workers to close the MA-7404 road.

The fire, which broke out in Jubrique on Saturday, July 10, left the Malaga road closed while firefighters worked to extinguish it.
The fire was reported in the early afternoon, with members of the Andalusian Fire Prevention and Extinction Plan (Infoca) deployed to the area, where they cut off the MA-7404.
Firefighters worked from midnight on Saturday to Sunday to tackle the flames in Cañete la Real, using four heavy helicopters, three light helicopters, a fire engine, and a group of 50 forest firefighters.
Members of the Provincial Firefighters Consortium also took part in the operation.
According to Infoca, the Jubrique forest fire was extinguished, although some outbreaks in the perimeter area forced the firefighters to continue to tackle the blaze.
The news comes after another fire broke out on Friday 9, in the Peña Blanca area of ​​the Malaga municipality of Jubrique, with almost 70 firefighters from the Infoca Plan deployed to combat the blaze, with residents of La Monarda and El Estercal evicted from their homes as a precaution.
As reported by the firefighting service Infoca, the fire alarm was raised by 112 emergency services at around 1.30am this morning, and strong winds in the area were making the fire spread.
As reported by the Guardia Civil, the MA-8301 highway was cut off at Km14,200, at the entrance and also at the exit in Jubrique, but the town was able to be accessed by the alternative routes MA-8305, MA-8304 , and MA-8302.
The Forest Fire Investigation Brigade (BIIF) of the Junta de Andalucia will now study the burned area to work out the number of hectares affected by the flames, and if any evidence of a crime is uncovered then the Nature Protection Service (Seprona) of the Guardia Civil will take over and investigate in Malaga.