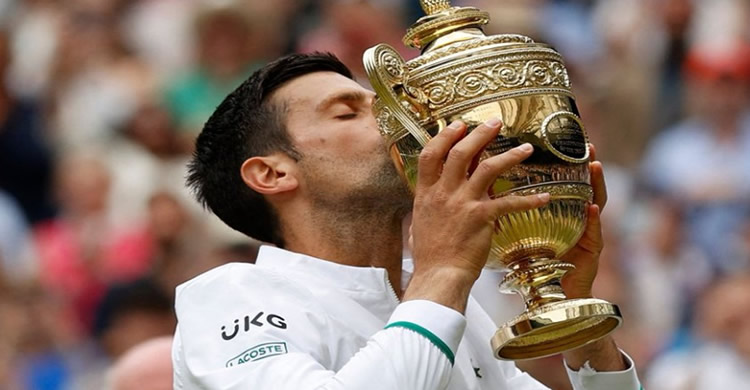 With this victory, Djokovic is the first male tennis player – since the Australian legend, Rod Laver, back in 1969 – to win the opening three Grand Slam tournaments of a tennis season, and is only the fifth player in history to achieve that.

The 34-year-old Serb was involved in a thrilling 6-7 6-4 6-4 6-3 battle with the 25-year-old Italian, Matteo Berrettini, who was making his first-ever appearance in a Grand Slam tournament final, and he certainly didn’t let himself down, as he captured the first set after a tie break.

A crowd of 15,000 witnessed a magnificent display of tennis from both players, who maybe suspected a shock was on the cards when the No1 seed lost the first set, before fighting back to win the next two sets in a true champion’s style, as, remarkably, today’s set was only one of two that he dropped during the whole of the SW19 fortnight.

Berrettini saved two match points at 5-3 in the fourth set, before being unable to return the third serve, slicing it into the net, and a joyous Djokovic collapsed to the hallowed grass with his arms stretched out wide, clearly emotional after his incredible achievement, while the Italian had very contrasting emotions, crouched double, hands on knees, after an admirable effort.

Speaking after his win, the champion said, “Winning Wimbledon was always the biggest dream for me when I was a kid. A seven-year-old boy in Serbia constructing a Wimbledon trophy with improvised materials and standing here with a sixth real trophy is incredible. It is amazing”.

Adding, “It was more than a battle. I would first like to extend my congratulations to Matteo, his family, and his team for a fantastic tournament. A tough match today, obviously I know that it’s not the best feeling losing in a final but I’m sure that there’s a great career ahead of you. As Matteo said, it’s just the beginning and I truly believe in that. Matteo has an incredible game, very powerful, an Italian hammer – I felt that!”.