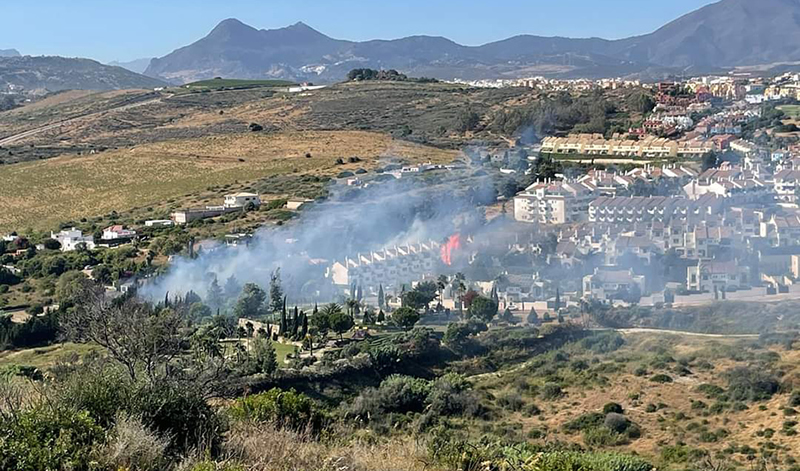 MANILVA scrubland fire adjacent to a residential urbanisation and a hotel, sees more than 300 people evacuated

According to the 112 emergency services, more than three hundred people have been evacuated this afternoon, Monday 12, as a precautionary measure, after a fire broke out in the Malaga municipality of Manilva, on the Costa de Sol.

In a statement, 112 reported receiving around 40 calls from alarmed residents of the area at around 6.25pm, informing them of a fire that had just broken out in scrublands in the vicinity of the El Indiano stream, at which point they mobilised the Fire Brigade, Infoca, the Guardia Civil, patrols from the Local Police, the Public Health Emergencies Company EPES 061 ambulance, and Manilva’s civil protection unit, to the location of the fire.
Once the emergency services arrived at the scene, because the fire was near to residential properties, the residents of the area were evacuated for their own safety, until the fire could be dealt with, a process that saw around 30 people from 15 homes in an adjoining urbanisation, along with 300 guests from a hotel, all asked to leave the area, to a safe distance, as a preventitive measure.
Some of the evacuated residents had already been affected by the smoke, but there were no serious injuries reported by the health crews on the scene.
Once the Manilva scrubland fire had been extinguished by the firefighters, as reported by the mayor of Manilva, after a technical appraisal of the affected properties had been carried out, residents – with the exception of two, whose home was damaged and who have had to be temporarily relocated by local council – were allowed to return to their homes, and the guests went back to their hotel, as reported by juntadeandalucia.es.