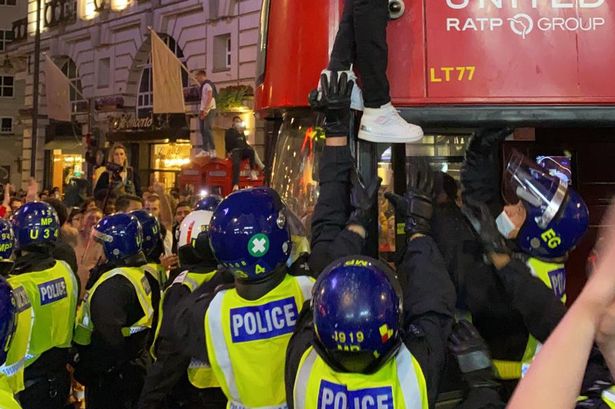 Football Fans reacted with disappointment after England lost to Italy on penalties in the Euro 2020 final. A crown of around 60,000 fans at Wembley witnessed the Three Lions’ defeat, while millions watched in pubs, fan zones and homes across the country.

England later descended into despair with riot police manning the streets of London after the football-mad country lost after reaching its first major tournament final in over half a century — once again falling short of glory in a ‘penalty curse’ shootout.

Reports said officers wearing riot gear and clutching shields were in position at a fan zone at Trafalgar Square, Piccadilly Circus and Leicester Square as supporters gathered and some set off flares following the nation’s defeat.

There were also hundreds of ticket-less match fans that managed to gain access to the stadium, causing anger to other fans that had paid to watch the match- some complaining to Sky News today that they had to watch the game on the TV screens as the gate-crashers stood in the aisles in front of them, security apparently not having the resources to control them.

London’s Metropolitan Police said 49 arrests were made as of 02:00 BST, amid pre-match unrest at the stadium, adding that 19 officers “were injured while they confronted volatile crowds”.

“Heartbreaking. Congratulations Azzurri on a great victory,” the royal couple wrote on Twitter.

“England, you’ve all come so far, but sadly this time it wasn’t our day. You can all hold your heads high, and be so proud of yourselves – I know there’s more to come,” they added.