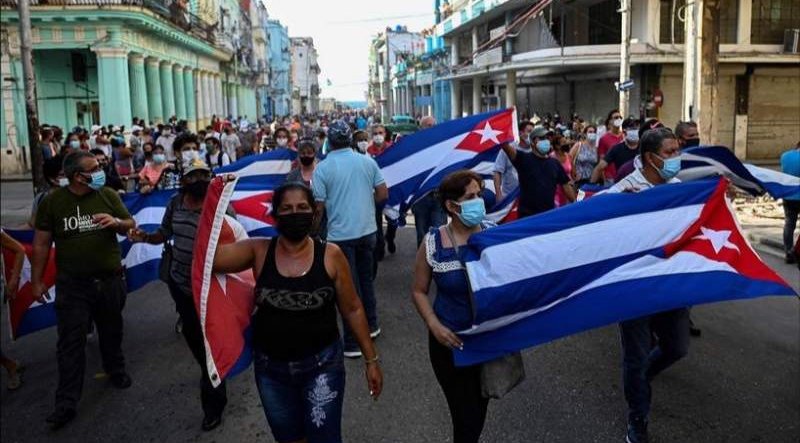 THOUSANDS take to the streets in Cuba shouting ‘Down with the dictatorship’. Thousands of people took to the streets of Cuba this Sunday, July 11, to protest against the Government shouting “freedom!”, in an unprecedented day that resulted in hundreds of arrests and clashes after the country’s president, Miguel Díaz-Canel, urged his supporters to come out and confront the protesters.

The protests, the strongest that have occurred in Cuba since August 1994 when the country plunged into a serious economic and health crisis, now as a result of the pandemic being out of control and a severe shortage of food, medicine and other basic products have been rationed, in addition to long power outages. “People began to scream, there are horrible blackouts, six hours, this does not stop, and it is every day. They began to walk, very peaceful, all they did was shout. There were many young people,” said a resident by phone who was inside a store at the time of the events.

Some images of hundreds of people marching this Sunday, July 11, amid shouts of “down with the dictatorship” and “homeland and life” through the streets of the town of San Antonio de Los Banos, in Artemisa, began to gain attention on social media networks which initiated calls to protest throughout Cuba. One of the largest protests took place in front of the Havana Capitol, where some 2,000 people gathered who later went down the Paseo del Prado towards the Malecon shouting “dictators” and “down with communism” among other phrases.

As reported by 20 Minutos, proof of the seriousness of the situation is that the authorities cut off mobile internet data services throughout the country, presumably to prevent videos of the protests from being broadcast and to reduce the ability of participants to convene. Around 3:00 pm local time (7:00 pm GMT), mobile internet service was cut off and calls began to show instability, a digital “blackout” lasting several hours that made it difficult to know in real-time what was happening on the island.

Miguel Díaz-Canel travelled to San Antonio de Los Banos a few hours after that first protest was broadcast, and later appeared on state television urging his supporters to take to the streets ready for “combat”. Díaz-Canell added, “The order to fight is given, the revolutionaries take to the streets,” said the president, who described the demonstrations as “provocations of the counterrevolution” and that he would not allow “anyone to defend an annexation plan.”