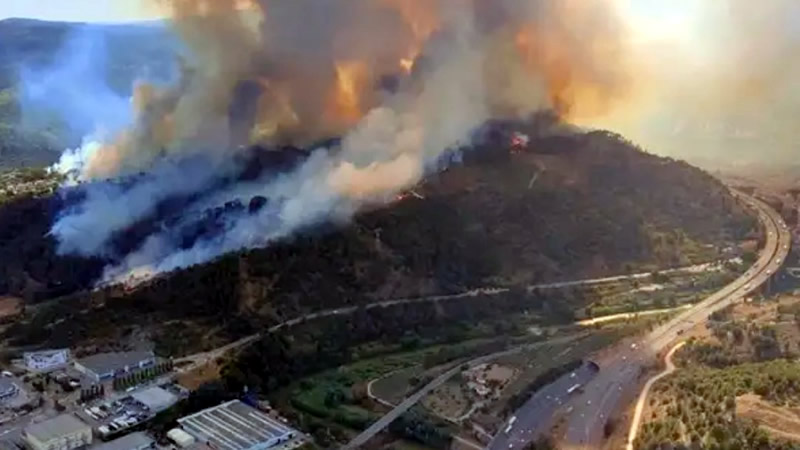 Huge fire near Barcelona causes main A-7 motorway to be cut off. image: @bomberscat

A huge scrubland fire just 20 minutes from Barcelona, in the town of Castellví de Rosanes, very close to Martorell, has been burning since the early hours of the morning of Tuesday 13, with the mobilisation of 58 fire crews on the ground, and 11 airborne.

This afternoon, the fire is spreading near to some urbanisations, so civil protection has asked that the citizens of these properties confine themselves to avoid problems, although several homes have been evacuated for the moment, as a precaution, due to the proximity of the flames to their homes.

Firefighting chiefs have called for the confinement of the Can Sunyer del Palau and Valldiana Urbanizations, due to the large column of smoke that the fire is causing, and the flames that are dangerously approaching some houses, because at this time the fire has not been brought under control by the firefighters as they work hard to extinguish it.

Firewatchers are observing the progress of the blaze from several nearby points, such as Sant Joan d’Espí, Sabadell, or Terrassa, and the strong winds are making it very difficult for the firefighters to fight the fire head-on, because it is burning the vegetation with such voracity, and the column of smoke has been seen from as far away as Barcelona.

Catalonia is really struggling today with fires breaking out, with another fire declared in Lloret de Mar, which was controlled within a few hours by firefighters, but then another three fires were also reported.

The authorities have been forced to cut the AP-7 motorway in both directions at Castellbisbal, very close to the Martorell toll, while firefighters work on the fire, and so far, according to the fire department of the Generalitat, the flames have burned 126 hectares, as reported by larazon.es.