Michelangelo’s thumb print investigated in Secrets of the Museum 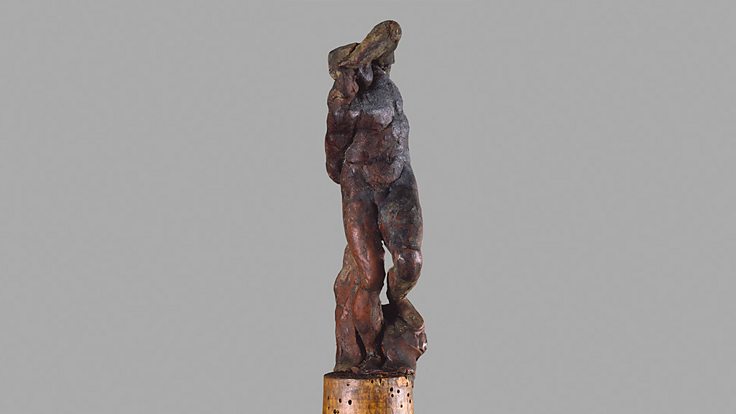 A possible thumb or finger print of the Renaissance master Michelangelo is seen for the first time on camera, on a wax model made by the artist, in scenes shown in the new series of BBC Two’s Secrets of the Museum starting Tuesday, July 20.

The 500-year-old figurine, made as a study for a much larger sculpture that was planned for St Peter’s Basilica in the Vatican, but which in the end was never fully completed, is one of the greatest treasures of the V&A.

The marks, known through examination of the wax, are being explored further by conservators and curators at the Museum.

“It is an exciting prospect that one of Michelangelo’s prints could have survived in the wax. Such marks would suggest the physical presence of the creative process of an artist. It is where mind and hand somehow come together… he destroyed a lot of the wax models himself. A fingerprint would be a direct connection with the artist,” said Senior curator Peta Motture.

These scenes form part of the first episode of the new series of Secrets Of The Museum, which returns following a hugely popular first season, at a time when museums around the UK have been closed for the majority of the past year.

Accompanying the V&A’s specialist teams, the series reveals the tricks of their trade – the painstaking craftsmanship and expertise involved in conserving, cleaning, loaning, acquiring and displaying some of the museum’s 2.3 million objects.

Housed at the V&A’s Museum Of Childhood, the team follow the little bear and curator Will Newton as they prepare to move from the site whilst the Museum undergoes renovations. Senior Curator Simon Sladen and Yvonne Brewster, one of the founders of Talawa Theatre Group, the UK’s leading Black British Theatre Group, look back at the Group’s formation and the challenges faced by young Black actors in the 1980s as a poster from their production of Smile Orange is put on display in the museum’s Theatre & Performance galleries.

Secrets Of The Museum in on BBC Two on Tuesday 20 July at 8pm BST and runs for six weeks. It will be available as a boxset on BBC iPlayer from 20 July.