Most popular attraction in each Spanish province revealed 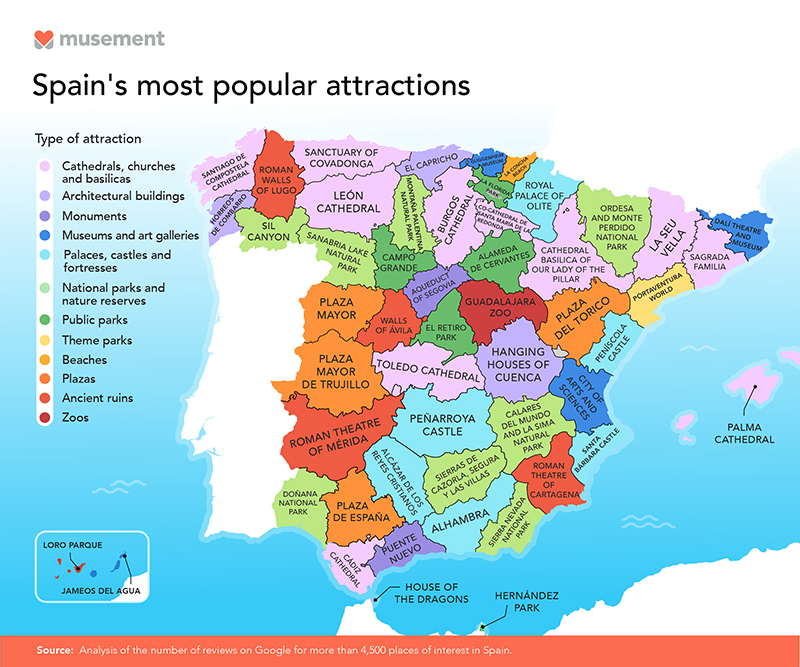 Most popular attraction in each Spanish province revealed

• The infographic highlights the enormous and varied cultural, natural and leisure offering available in Spain

As the UK prepares to lift quarantine for vaccinated travellers coming from amber countries, a Spanish holiday might just become a reality for many this summer. If you’ve been longing to see Barcelona’s Gaudi masterpieces, spend a day flying down waterslides with the family, visit the famous Alhambra, or stroll on the white sandy beaches of Spain, then the wait is over.

With attractions in Spain largely reopened, Musement, the digital discovery and booking platform for travel activities and experiences around the world, has developed a map with the most popular monument and attractions in each Spanish province.

To select the 52 most popular attractions (one for each province and autonomous city), more than 4,500 places of interest were considered throughout the country. The number of Google reviews were analysed and the attraction with the highest number of reviews was selected as the most popular.

The infographic highlights the enormous and varied cultural, natural and leisure offer available in Spain. Throughout the country there are countless attractions, from architectural landmarks to castles and historic ancient ruins, not forgetting theme parks, public parks and beaches, there is something to suit all tastes.

With so much on offer it can be difficult to decide what to choose between, but what attractions are must-dos and must-sees that you can’t miss out on?

For travellers who prefer to escape the crowds and get away from it all, then national parks such as the Sil Canyon (Ourense), Ordesa and Monte Perdido National Park (Huesca), or Montaña Palentina Natural Park (Palencia) are ideal options.

Among Spain’s most popular tourist attractions is the Sagrada Familia (Barcelona), which accumulates more than 155,000 reviews on Google. But this is not the only religious temple to earn its place on the map. The Santiago de Compostela Cathedral (La Coruña), the Burgos Cathedral (Burgos), the Sanctuary of Covadonga (Asturias) and the Cathedral-Basilica of Our Lady of the Pillar (Zaragoza) also draws many visitors.

The plazas and public parks, a meeting point for both locals and tourists alike, are in many times the most emblematic places not only of their respective locations but also of their provinces. This is the case of Plaza de Espana (Seville), the Plaza Mayor (Salamanca), the Plaza del Torico (Teruel), El Retiro Park (Madrid) or the Alameda de Cervantes (Soria).

There is no lack of architectural gems on the Musement map, such as the Hanging Houses (Cuenca) or the Hórreos de Combarro (Pontevedra), nor ancient ruins, such as the Roman theatres of Merida (Badajoz) or Cartagena (Murcia).

For thrill seekers, there’s reaching 110km/h in the famous Dragon Khan of PortAventura (Tarragona). Culture vultures can marvel at the great works of surrealism in the Dalí Theatre and Museum (Girona). History buffs can discover the old home of the Catholic Monarchs in the Alcázar de los Reyes Cristianos (Cordova) or travel to the past and visit the Roman Walls of Lugo (Lugo). These are just some of the most popular attractions in Spain which can be enjoyed this summer.

Thank you for reading, head to Euro Weekly News for more reports and updated local, national and international news.