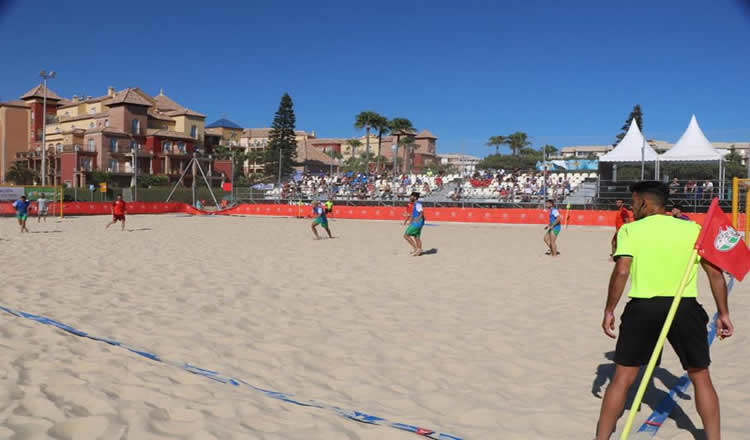 The motto of the Malaga municipality of Torrox says that the region has the best climate in Europe, and right now, its commitment to sports tourism is also becoming one of the best, and the area is building a reputation that is attracting a lot of interest from the world of beach sports activities.
As Oscar Medina, the mayor of Torrox, and Jose Manuel Fernandez, the Councilor for Sports have both pointed out, the town hall’s commitment to provide the beaches with the necessary infrastructure to host top-level sporting tournaments, “is having an effect on, and creating an injection for the local economy.
Torrox town hall has already staged the Spanish Beach Handball Cup at the end of May, as well as the European final, and the municipality has also hosted several of the National Beach Soccer League matches – both female and male – in the sports area of ​​Ferrara.
The mayor said, “The investment in the improvement of the sports area of ​​Ferrara is being amortised with its impact on the entire municipality”, referring to the fact that thanks to these tournaments, which have been accompanied by a full house in the hospitality industry, “created momentum at the end of May to bring forward the tourist season, both for catering and for all local commerce in general, not only in the area near the game area, but has spread to different areas of the municipality”.
Also, he pointed out how much promotion the municipality had gained through the events being broadcast both by Teledeporte and by streaming internationally from the federations’ own pages, saying it “is the best promotional showcase that has brought the name of Torrox to every corner”.
Mr Fernandez added that in addition to the commitment to beach handball, now reinforced with beach soccer, in August, Torrox will host the Andalucian Aquathlon Championship, the only event held in the entire community, with the mayor concluding, “Torrox has established itself as the headquarters of summer sports”, as reported by 101tv.es.