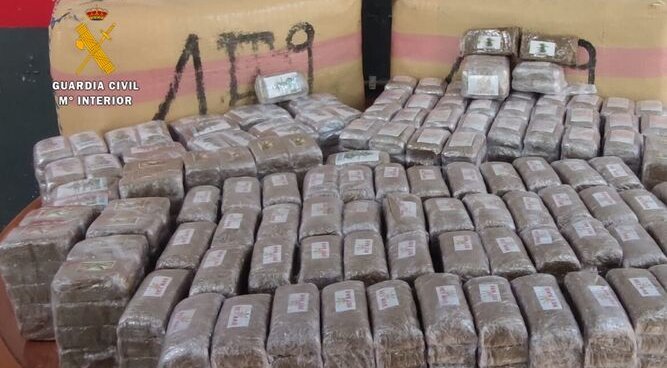 OFFICERS from the Guardia Civil have arrested two on suspicion of drug trafficking after finding a 130 kilo hashish haul in Malaga.

Police from Coin in Malaga arrested the two for drug trafficking and crimes against road safety after finding the hashish.
The investigation began after the agents received a tipoff about a group of people who used storage lockers and warehouses, rented by third parties in the municipality, for the concealment and distribution of narcotic substances.
Following a police operation, one of the storage lockers was located, where a total of 130 kilos of hashish were found.
Officers arrested one person in the storage locker while another man was also arrested for his alleged participation in crimes.
According to reports, during his arrest the man tried to escape by car, driving at high speed, and leading police to arrest him for crimes against road safety.
The two arrested were placed at the disposal of the judicial authority with one entering prison.
The news comes after earlier this year the Guardia Civil brought down a hashish gang that was operating across Europe.
Police arrested 100 people and confiscated 5,040 kilos of hashish and finding the gang, which had been based in Andalucia.
According to the Guardia Civil, one branch of the organisation launched the boats down the Guadalquivir River, another sent drugs to Europe in trucks from a warehouse located in Dos Hermanas, and a third carried out refuelling on the Costa del Sol.
The investigation began when it became known that a gang was launching boats down the Guadalquivir River. The clan known as MONPARLET, was also launching the boats between the Sevilla towns of Isla Mayor and Puebla del Rio.
One branch of the organization was dedicated to supplying fuel to drug boats, departing from the ports of La Atunara, Sotogrande and La Duquesa.
Another branch of the same gang transported the drugs that were brought into the peninsula to Europe, using vehicles they had hidden in the Sevilla town of Dos Hermanas in Andalucia.