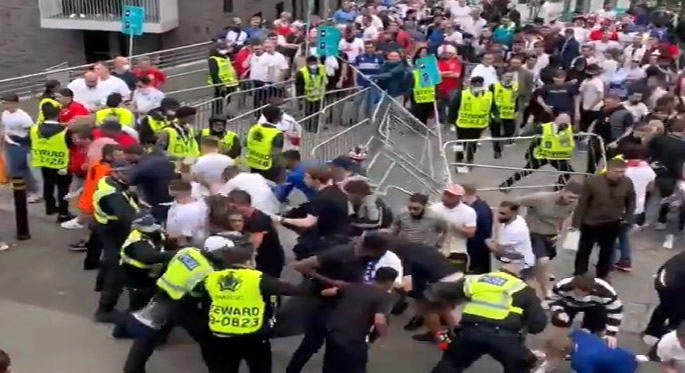 The English Football Association has today, Tuesday 13, been charged by football’s governing body in Europe, UEFA, over the chaotic scenes – that were shown on television screens all over the world – that included fans booing the Italian national anthem before the match, fireworks being launched, objects being thrown from the crowd, and a fan invading the pitch.

UEFA have reportedly charged the EFA with four offences regarding the behaviour of the supporters, and a separate investigation is ongoing into the major security breach that took place outside the stadium before the match, during which it has been reported by some outlets that around 5,000 people had managed to break through the security cordon into the concourse, which, after being investigated fully, is likely to bring another fine from UEFA.

Footage shown on social media showed alleged ticketless fans pouring through the breached security cordon into the concourse, leading to ugly scenes with the hooligans acting aggressively towards anybody who tried to stop them.

A previous fine of £25,630 was given to the EFA only three days ago, for crowd trouble during the semi-final match with Denmark, when a laser pen was seen being pointed in the face of goalkeeper Kasper Schmeichel, and the fine again included the booing of the Danish national anthem, and letting off fireworks, as reported by dailymail.co.uk.

A UEFA statement issued today said, “In accordance with Article 31(4) DR, a UEFA ethics and disciplinary inspector has been appointed to conduct a disciplinary investigation into events involving supporters which occurred inside and around the stadium”.

There have also been rumours that the official capacity rule of 60,000 was broken, with some unconfirmed reports saying there could have been around 65,000 in the stadium, something which will only be clarified once the UEFA inspection is completed.

Claims have also been made that people were able to enter through broken turnstiles even as extra-time was being played, with the police allegedly making 86 arrests, which included 53 at Wembley, including ABH, criminal damage, drunk and disorderly, and public order offences.